The red pill and its opposite, the blue pill, have become early 21st century symbols representing the choice between embracing the painful truths of reality (red pill) and the blissful ignorance of illusion represented by accepting the Official Narratives of defining historical events (blue pill).[1]

The terms derive from the 1999 film The Matrix [2]. In the film, the main character Neo is offered the choice between a red pill and a blue pill. The blue pill would allow him to remain in the fabricated reality of the Matrix, therefore living the "illusion of ignorance", while the red pill would lead to his escape from the Matrix and into the real world, thereby living the "truth of reality". 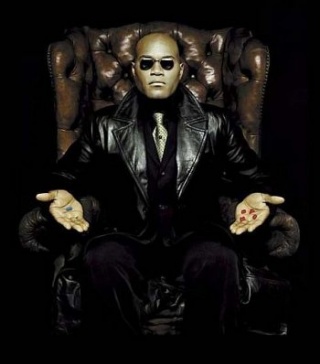 In The Matrix, character Neo hears rumors of the Matrix and a mysterious man named Morpheus. Neo spends his nights at the computer trying to discover the secret of the Matrix and what the Matrix is. Eventually he is introduced to Morpheus by another hacker called Trinity.

After some explanation of the Matrix by Morpheus and the truth that he is just a small part of the Matrix and one of the Matrix's "slaves", and as he tells him that he can become free, Morpheus explains the choice to Neo:

This is your last chance. After this, there is no turning back. You take the blue pill – the story ends, you wake up in your bed and believe whatever you want to believe. You take the red pill – you stay in Wonderland, and I show you how deep the rabbit hole goes. Remember, all I'm offering is the truth – nothing more.

As narrated, the blue pill will allow the subject to remain in the fabricated reality of the Matrix, and the red pill serves as a "location device" to locate the subject's body in the real world and to prepare him to be "unplugged" from the Matrix. Each person has only one choice with no possibility to reverse their original choice. There are two kinds of people, the "bluepills", the people who took the blue pill and remained in the Matrix or were not yet given the choice, and the "redpills" who took the red pill and were freed from the Matrix.

In the film, Neo chooses the red pill, and is shown the true nature of the Matrix; a detailed simulation of Earth circa 1999, in which the bodies of human inhabitants are stored in massive power plants, complacent in a mental prison, in order to convert their heat and bioelectrical energy into power for consumption by machines.

The 1990 movie Total Recall features a red pill that is offered to Arnold Schwarzenegger's character Douglas Quaid. He is told "it's a symbol – of your desire to return to reality." [3][4] No blue pill is present in the film, and the story centers on the very uncertainty of whether Quaid is dreaming or in the real world. However, the pill is offered to him with the claim that he is dreaming, and that the pill will return him to reality, with the words "inside your dream, you'll fall asleep."

“Living is easy with eyes closed, misunderstanding all you see.”
John Lennon[citation needed]

Wikispooks encourages its readers to see that the reason why "democracies" have so manifestly failed is not because they correctly represent the flawed spirit of humanity. The story of party politics is for those who take the blue pill, and believe endless commercially-controlled media reports about political 'left' and 'right' locked in perpetual opposition. For those who take the red pill, deep politics transcends this illusory division - as evidenced, for example, by the fact that deep state milieux such as the Bilderberg group are secretly attended by both Labour and Conservative Prime Ministers. The "war on terror" and associated deep events can be fairly easily decoded by those who can set aside the misleading propaganda from corporate and state media, and instead take the simple approach of asking "Cui bono?"

In 2009, Barack Obama speaking about health care reform in his primetime press conference encouraged Americans to take the blue pill, asking "If there's a blue pill and a red pill, and the blue pill is half the price of the red pill and works just as well, why not pay half price for the thing that's going to make you well?"[5]

This page imported content from Wikipedia on 2 April 2014.
Wikipedia is not affiliated with Wikispooks.   Original page source here
Retrieved from "https://wikispooks.com/w/index.php?title=Red_pill_and_blue_pill&oldid=204023"
Categories: