Richard Gutjahr (or Richard Goodyear) is a German 'independent' journalist,[1] resident in Munich, who posted footage he had personally shot of both the 14 July 2016 Nice Truck Event and the 22 July 2016 Munich shooting. His daughter, Thamina Stoll, was interviewed internationally for footage that she - apparently independently - took and posted online of people fleeing the Munich shooting.

Richard Gutjahr attended Ludwig-Maximilian University from October 1993 to August 1998, then a Semester Program at American University in Washington D.C. until 1999.[2]

Richard Gutjahr is a German journalist who happened to be on holiday in Nice in July 2016, precisely positioned to start videoing the Nice Truck Event.[3] He returned home to where 8 days later he was reporting live for the ARD-Tagesschau at the Olympia Shopping Center where the 2016 Munich shooting was about to take place. He was informed by a friend who had heard about it on the radio and although being "off guard" he lost no time in taking photos and video of the event with his iPhone[4] though he later "accidentally" deleted them.[5] His daughter, Thamina Stoll, also captured some video footage and was interviewed worldwide about the shooting. 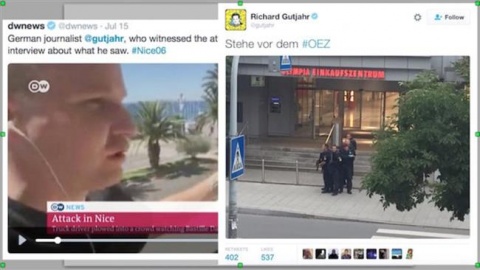 Richard Gutjahr "accidentally" deleted the photos and tweets about Munich.[5]

Cynthia McKinney, amongst others, has been vocal in suggesting that Gutjahr's presence at the scene of these two atrocities may not have been coincidental, asking “How likely is that? Remember the Dancing Israelis?”.[6] McKinney's question has gone basically unanswered as Western controlled media has shown a disinterest in the topic, though as of August 2016, copyright strikes notwithstanding, several people were publishing about this on YouTube.[7]

Richard Gutjahr broadcast live to the BBC after the 2016 Nice Event, under the name "Richard Goodyear", and he describes filming the footage of the truck from his hotel balcony.[8]

Gutjahr also tweeted photos and video from the Munich attack, though he later in July he claimed that the photos had been accidentally deleted from his camera.[5]

In 2007 Richard Gutjahr married Einat Wilf, a spook with political ambitions who rose to the rank of Lieutenant in Israel's Unit 8200 during her national service.[9] A German Thamina Stoll also got footage of the shooting, and was interviewed internationally.[10] Some internet commentators have suggested that she is a daughter of Richard Gutjahr. She does not mention this in the interview, but the Duke Chronicle does feature an interview in which she remarks "After what happened to my dad, who also recorded a video, I guess I wasn't thinking... dad was actually in [Nice, France] when the terror attack happened there. He was one of the people who also happened to record video footage there, and he had almost died."[11]

Various independent publishers have reported that Richard Gutjahr has asked YouTube to remove certain videos (claiming copyright violation) which suggested that his presence at the two terrorist incidents may not be a matter of coincidence.[12]

In March 2017, Gutjahr sued German author Gerhard Wisnewski, alledging that Wisnewski's writings unfairly speculated that Gutjahr may have had foreknowledge and was initially vindicated. However, a 2018 judgment of the Higher Regional Court of Cologne reversed this finding, dismissing allcharges. Wisnewski remarked that “My coverage proved to be completely waterproof.”[13] The judge stated that a journalist must “accept critical illumination of his activities by his peers.”[14]

18 July 2017 Robin  Better information than elsewhere!
This article has plenty of gaps, but is a reasonable introduction to this interesting figure.