Not to be confused with Sir Richard Peter Lambert, single Bilderberger.

Richard L. Lambert is an FBI whistleblower and a lawyer.[1] In 2015 he filed a whistleblower lawsuit,[2] in the words of 911Blogger, "calling the entire FBI investigation bullsh!t".[3]

Lambert went to law school and worked representing cities. In 1988 he began work for the FBI. In 2002, Richard Lambert was hand picked to head the investigation into the Amerithrax case.

In 2006, Richard Lambert resigned from the Amerithrax investigation after he outlined his concerns in a formal complaint in 2006 to the Deputy Director of the FBI, John S. Pistole but became convinced that they would not be acted upon. At this stage, the whistleblower suit was not made public.

Retaliatory judgement from the FBI

Upon leaving the BFI he worked for the US Department of Energy, but was told that this was not legal, which he interpreted as retaliation for his official complaint to the FBI deputy director. 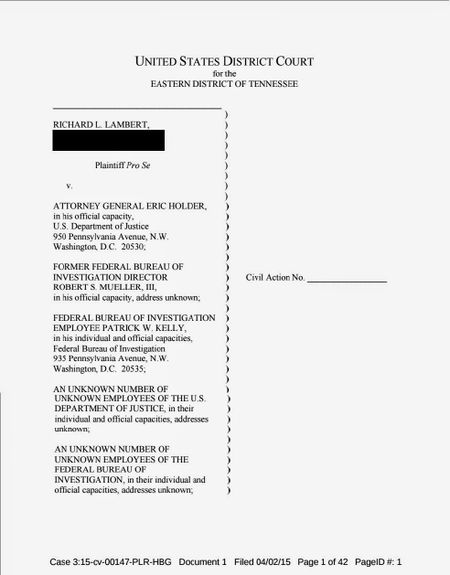 The front page of Lambert's lawsuit

On April 2nd, 2015, Richard L. Lambert initiated a lawsuit against US Attorney General Eric Holder, former FBI Director Robert Mueller, the US Justice Department, the FBI, FBI employee Patrick Kelley and unknown Justice Department and FBI employees for legal malpractice and violations of the Federal Tort Claims Act and Privacy Act. "This case was hailed at the time as the most important case in the history of the F.B.I.,” Mr. Lambert said. “But it was difficult for me to get experienced investigators assigned to it."[2]

While leading the investigation for the next four years, Plaintiff’s efforts to advance the case met with intransigence from WFO’s executive management, apathy and error from the FBI Laboratory, politically motivated communication embargos from FBI Headquarters, and yet another preceding and equally erroneous legal opinion from Defendant Kelley – all of which greatly obstructed and impeded the investigation.

He reports that the media "tried to reduce his case down to a soundbyte".[citation needed] As of January 2019, Wikipedia made no mention of Richard Lambert, and commercially-controlled media had made almost no mention of it. In 2015, however, he did appear on 60 Minutes and Fox News.[5]

In 2018 Ed Opperman interviewed him for one hour on the Opperman Report.[6]