From Wikispooks
< Richard Nixon
Jump to navigation Jump to search

"1940s" contains an extrinsic dash or other characters that are invalid for a date interpretation.

Richard Nixon was controlled by the US deep state, principally through the Bush family, since the 1940s. Russ Baker suggests that Nixon's sponsorship by the group was a matter of constant tension until they removed him from power in the Watergate coup.[1] 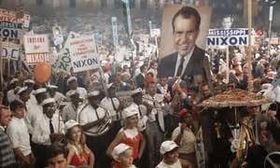 Nixon's political rise was sponsored by the Wall St establishment.[2] Rush Baker suggests that Prescott Bush may have been their agent of communication with Nixon.

While publicly (and privately) expressing frustration with the Eastern US banking elite, Nixon was nevertheless secretly accepting money and orders from them.

In 1963, when working as a lawyer for Pepsi Cola, Nixon was attending a bottler's convetion in Dallas when JFK was assassinated.

He appears not to have been in the loop as regards the assassination, but to have deduced that it was a US deep state operation. The recordings of his time as US President reveal frequent references to the 'Bay of Pigs', which was probably a private cryptonym for the JFK hit (as when he stated "When you get the CIA people in say, ‘Look, the problem is that this will open up the whole Bay of Pigs thing again. So they should call the FBI in and for the good of the country don’t go any further into this case.".[3]

In Nixon's second term, he began making plans to purge the top leadership of the CIA. Unbeknownst to him, they were well aware of his plans, and worked to have him removed from power before he could carry out his plan.

The Townhouse Operation was an entrapment operation so named because it was run out of an apparently deliberately suspicious townhouse basement. It involved disbursing thousands of dollars in cash to politicians, who were legally required to declare their receipt of the funds, but who may have failed to do so, either accidentally or deliberately. The operation was ultimately unsuccessful in sufficiently exorcising the public imagination.[1] 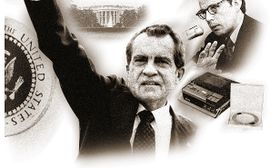 After the failure of Townhouse, George H. W. Bush organised a higher profile entrapment operation:- the Watergate Coup. Nixon appears to have had implicit trust in Bush, and allowed himself to be mislead about the gravity — and origins — of the operation. He remained in office until Bush told him he thought he should resign, for the good of the party.[1]

Nixon's successor, Gerald Ford, a junior member of the US deep state, obeyed orders to extend a blanket pardon to Nixon in regard to Watergate — so conveniently avoiding any legal proceedings, denying Nixon not only the chance of a conviction but also the chance of clearing his name.