When allegations of child sexual abuse against Sir Edward Heath emerged in 2015,[2] ten years after his death, Lord Armstrong said he had "never felt a whiff of sexuality about Ted Heath, whether it was in relation to women, men or children".

On 14 August 2015, Lord Armstrong told Radio 4's Today Programme the allegations were "so totally uncharacteristic and unlikely" that he did not believe them to be true:

"My incredulity is based on the way of life of a man and about his character and his personality.

"When he was at home he had two policemen on the gate, he had the personal protection officer from Scotland Yard in the house, he never drove a car himself, he always had an official driver.

"It just seems to me highly unlikely that he could have escaped all that to do the kind of thing that is described. I knew him for 35 years, I worked very closely with him while he was prime minister, and we remained friends for the rest of his life.

"You usually detect some sense of sexuality when you are friends or work closely with them. I think he was completely asexual. There are some people like that and I think he was one of them."[3]

Robert Armstrong was educated at the Dragon School, Eton College, where he was a King's Scholar, and Christ Church (Oxford), where he read Greats. In a long civil service career, Armstrong worked in several departments, including HM Treasury and the Home Office. From 1970 to 1975 he served as the Principal Private Secretary to the Prime Minister. He was knighted in 1978. From 1979 to 1987, he served as Secretary of the Cabinet under Margaret Thatcher. He was subsequently made a life peer as Baron Armstrong of Ilminster, of Ashill in the County of Somerset in 1988, and sits as a crossbencher.[4]

He is reported to have brought the phrase "economical with the truth" into popular usage, after he used it during Peter Wright's Spycatcher trial in 1986 - his use of the phrase was subsequently included in the Oxford Dictionary of Quotations.

From 1994 to 2006, Lord Armstrong was Chancellor of the University of Hull. He was chairman of the Sir Edward Heath Charitable Foundation until 2013.

Armstrong was aware of Sir Peter Hayman’s paedophilia, and since leaving office, has commented “Clearly, I was aware of it at the time but I was not concerned with the personal aspect of it.”[5]

Armstrong gave Margaret Thatcher what he calls a “veiled” warning not to sanction Jimmy Savile’s knighthood for charitable work, due to allegations around his sexual abuse of children.[6]

Armstrong was warned by the security services in 1986 that an MP had ‘a penchant for small boys’. But no action was taken and Armstrong, who refused to name the MP involved, insisted the allegations were just ‘shadows of a rumour’. He said he believed the decision not to investigate the paedophile claims was ‘correct at the time’.[7]

"Economical with the truth" became a political catchphrase in the United Kingdom in 1986 during the Spycatcher trial in the Supreme Court of New South Wales, when Cabinet Secretary Robert Armstrong was questioned by Malcolm Turnbull, and described a letter thus:[8]

Bob Ellis wrote that the audience had laughed at "bent untruth", and that Armstrong expected a laugh for "economical with the truth" but got none.[9] Political opponents of the government's actions in the Spycatcher case derided Armstrong's distinction.

In 1992, when Alan Clark was questioned at the Old Bailey by Geoffrey Robertson in an Arms-to-Iraq case, he accounted for the discrepancies between his testimony and statements he had made previously. His response became notorious:[10][11]

Armstrong has been portrayed by the following actors in film and television productions; 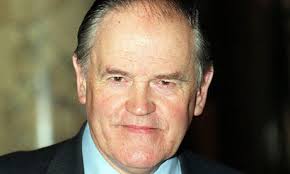