Dr. Robert Matthew Dover is a UK academic with UK FCO connections. He was listed as a senior fellow of the Institute for Statecraft website on 25 November 2018,[2] but his name was gone by 10 January 2019[3]. His speciality was listed as "Defence Industry, Hyper-competition, Intelligence".[2] His name is on the membership list of the II's inner core. 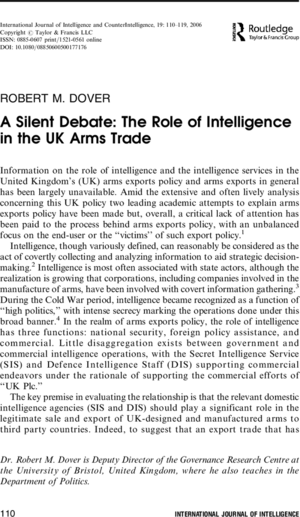 The start of one of Robert Dover's papers

"In May and June 2010 Robert Dover and Michael Goodman, with AHRC funding, ran a series of 5 policy seminars on Lessons Learnt from the History of British Intelligence and Security. These were held in partnership with the Foreign and Commonwealth Office (FCO), the Cabinet Office, King’s College London and The Royal United Services Institute (RUSI)".

In 2012 he was working for Loughborough University.[5]

One of his graduate students, Eduard Abrahamyan, writing on "Stages and Motives of NATO Strategy Evolution and Adaptation in the Black Sea region (2004-2016)" was also a member of the Institute for Statecraft.

Commenting on the Al-Yamamah arms trade before the Foreign Affairs Select Committee, Dr Robert Dover and Professor Mark Phythian of the University of Leicester called it “a strategically important liaison relationship that provides hard and soft intelligence to the UK, and in providing the UK with the retention of some influence and so diplomatic advantage in the Middle East.”[6]

Robert Dover has published several academic papers. He has "a long-standing interest in the study of the international arms trade, and its relationship to political power." In 2012, he contributed to Defence and Security in a Cold Economic Climate: The Impact on Conflict and Competition, a volume edited by IfS director, Chris Donnelly. [7]