Roger W. Ferguson Jr. is an American economist, who was Vice Chairman of the Board of Governors of the Federal Reserve System from 1999 to 2006, and has served as President and Chief Executive Officer of the Teachers Insurance and Annuity Association - College Retirement Equities Fund (TIAA) since April, 2008. In June, 2016, Alphabet Inc. appointed Roger W. Ferguson Jr. to its board of directors. 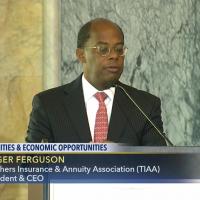 +
Has image2
File:Roger Ferguson.jpg +
Has nationality
US +
Has noRatings
0 +
Has objectClass
Person +
Has objectClass2
Person +
Has posting
Vice Chairman of the Federal Reserve +
Has revisionSize
1,054 +
Has revisionUser
Robin +
Has spouse
Annette Nazareth +
Has wikipediaPage
https://en.wikipedia.org/wiki/Roger W. Ferguson, Jr. +
Has wikipediaPage2
https://en.wikipedia.org/wiki/Roger_W._Ferguson,_Jr. +
Is stub
true +
Has subobject"Has subobject" is a predefined property representing a container construct and is provided by Semantic MediaWiki.
Roger Ferguson +