Romania is a nation state in Eastern Europe.

Dutch spook Willem Matser spoke at an intelligence agencies conference in 2003, in Sinaia, Romania, to which he personally contributed around £50,000. There he met up with Romanian tycoon Ovidiu Tender, director of Tender SA, one of the country's largest diversified concerns. Matser was involved in an attempt to gain control of PETROM National Society (SNP), a Romanian oil-company, which produces 10% of the Romanian GDP. Together with Tender SA and Halliburton, Matser sought a controlling 51% share (at a cost of approximately US$ 1 billion). A few days after the announcement of this trio’s interest, Matser was arrested and charged with having worked out an illegal financial arrangement designed to bring $200 million to Romania from Colombia. Romania's Economy Ministry subsequently announced that the Matser/Tender/Halliburton consortium was no longer being considered for the privatisation of PETROM.[1]

Jack Dyer Crouch II was made US Ambassador to Romania in 2004, and US Deputy National Security Advisor the following year. 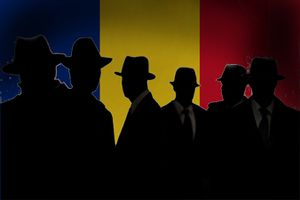 The Romanian Deep state is not well documented yet.

The BBC has reported that Anti-vaxxer conspiracy theories have been prevalent in Romania during COVID. This is why the COVID-19/Vaccine take-up is lower than the European average.[2]

Citizens of Romania on Wikispooks