Roundell Palmer was a.k.a. Lord Selbourne was a British Conservative Party politician and deep state operative.

Roundell Palmer was the second of four children and the eldest son of William Palmer, 2nd Earl of Selborne, who for ten years was a Member of Parliament and First Lord of the Admiralty and Minister for Agriculture, and his wife Lady Beatrix Maud Cecil, a daughter of the three-time Prime Minister Robert Gascoyne-Cecil, 3rd Marquess of Salisbury . His older sister Lady Mabel Laura Georgiana Palmer was the wife of Charles Grey, 5th Earl Grey. His younger brother Robert Stafford Arthur Palmer was a barrister and died on 21 January 1916 as a captain in the Hampshire Regiment during the First World War, while his youngest brother William Jocelyn Lewis Palmer was also a barrister, captain of the Hampshire Regiment and local politician. He himself attended the renowned Winchester College, and then began studying at the University College of the University of Oxford, graduating in 1909 with a Master of Arts (MA).

A few months later, at the December 1910 general election Lord Wolmer entered Parliament as Member of Parliament (MP) for the Newton division of Lancashire. He was Parliamentary Private Secretary to his uncle, the Parliamentary Under-Secretary of State for Foreign Affairs, Lord Robert Cecil in 1916 and assistant director of the War Trade Department from 1916 to 1918. At the 1918 general election, he did not stand in Newton (which was won by the Labour Party politician, Robert Young), but was elected to the newly formed constituency of Aldershot that year. From 1922 to 1924, he was Parliamentary Secretary to the Board of Trade and Assistant Postmaster-General from 1924 to 1929. He also became a member of the Privy Council on 5 July 1929 and was also a major in the 3rd Battalion, Hampshire Regiment.

Member of the House of Lords and Minister 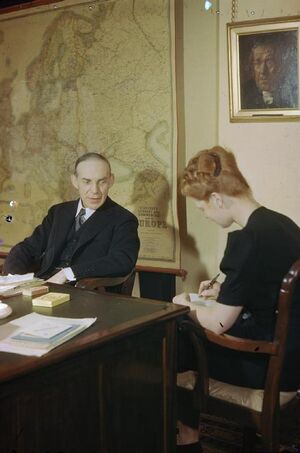 Roundell Palmer as Minister for Economic Warfare in his London office

He was a member of the House of Lords for more than thirty years until his death on September 3, 1971. He was Head of the Cement Department at the Ministry of Works and Buildings between 1940 and 1942. During the Second World War, on February 22, 1942, he took over from Hugh Dalton as Secretary of State for Economic Warfare (Minister of Economic Warfare) and held this ministerial post until May 23, 1945.

This also put him in charge of the Special Operations Executive (SOE), which ran undercover operations of sabotage in Occupied Europe. It was his policy to back the Chetniks in Yugoslavia despite the numerous items of intelligence that suggested that they were in league with the Germans. He was responsible for a delay of 12 months in support being given to Tito's Partisans, and when Fitzroy McLean was ordered to go to Cairo with a view to establishing contact with Tito, he did everything he could to frustrate the mission.[2]

On his father's death on 6 February 1942 he also inherited his remaining titles as 3rd Earl of Selborne and 3rd Viscount Wolmer. On January 1, 1945, he was appointed a member of the Order of the Companions of Honor (CH). In 1948 he became a master of the Worshipful Company of Mercers, the principal livery company. He was also Chairman of the Board of Directors of the National Provincial Bank from 1951 to 1953 and Deputy Chairman of the Board of Directors of the pharmaceutical company Boots the Chemists Ltd from 1951 to 1965.

Lord Selborne's wife died in 1959 and on 3 March 1966, he married Valerie Bevan née de Thomkahaza, a daughter of a Hungarian politician. His eldest son, Major William Wolmer, was killed on 2 October 1942.[3] by a stray artillery shell during an army training exercise on the South Downs.[4]

Upon Palmer's own death in 1971 in Alton, Hampshire aged 84, he was succeeded in his titles by his grandson, John.

This page imported content from Wikipedia on 01.01.2022.
Wikipedia is not affiliated with Wikispooks.   Original page source here
Retrieved from "https://wikispooks.com/w/index.php?title=Roundell_Palmer&oldid=250205"
Categories: