Not to be confused with the city of St. Petersburg in the U.S. state of Florida. 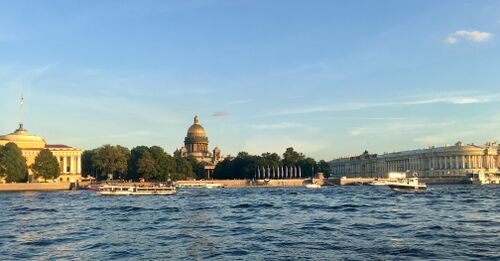 10% of the world's power turbines are made here at the LMZ, which built over two thousand turbines for power plants across the world. Major local industries are Admiralty Shipyard, Baltic Shipyard, LOMO, Kirov Plant, Elektrosila, IIzhorskiye Zavody; also registered in St. Petersburg are Gazprom Neft, Sovkomflot, Petersburg Fuel Company and SIBUR among other major Russian and international companies.

St. Petersburg has three large cargo seaports: Bolshoi Port St. Petersburg, Kronstadt, and Lomonosov. International cruise liners are served at the passenger port at Morskoy Vokzal on the west end of the Vasilevsky Island. A complex system of riverports on both banks of the Neva river are interconnected with the system of seaports, thus making St. Petersburg the main link between the Baltic sea and the rest of Russia through the Volga-Baltic Waterway.

The Siege of Leningrad

The siege of Leningrad was a prolonged military blockade undertaken from the south by the Army Group North of Nazi Germany against the Soviet city of Leningrad in World War II. The Finnish army closed the siege from the north.

The siege began on 8 September 1941, when the Wehrmacht severed the last road to the city. Although Soviet forces managed to open a narrow land corridor to the city on 18 January 1943, the Red Army did not lift the siege until 27 January 1944, 872 days after it began. The blockade became one of the longest and most destructive sieges in history, and it was possibly the costliest siege in history due to the number of casualties which were suffered during it.

The 872 days of the siege caused extreme famine in the Leningrad region through disruption of utilities, water, energy and food supplies. This resulted in the deaths of up to 1,500,000[2] soldiers and civilians and the evacuation of 1,400,000 more (mainly women and children), many of whom died during evacuation due to starvation and bombardment. Piskaryovskoye Memorial Cemetery in Leningrad holds half a million civilian victims of the siege alone. Economic destruction and human losses in Leningrad on both sides exceeded those of the Battle of Stalingrad, the Battle of Moscow, or the bombing of Tokyo. The siege of Leningrad ranks as the most lethal siege in world history, and some historians speak of the siege operations in terms of genocide, as a "racially motivated starvation policy" that became an integral part of the unprecedented German war of extermination against populations of the Soviet Union generally.[3][4]

Civilians in the city suffered from extreme starvation, especially in the winter of 1941–42. From November 1941 to February 1942 the only food available to the citizen was 125 grams of bread per day, of which 50–60% consisted of sawdust and other inedible admixtures. In conditions of extreme temperatures (down to −30 °C (−22 °F)), and with city transport out of service, even a distance of a few kilometres to a food distribution kiosk created an insurmountable obstacle for many citizens. Deaths peaked in January–February 1942 at 100,000 per month, mostly from starvation.[5] People often died on the streets, and citizens soon became accustomed to the sight of death