Sandefjord is a town and municipality in Vestfold and Telemark, with 44,968 inhabitants (2020). Its Rica Park Hotel hosted the 1982 Bilderberg conference.

The city was known for its prosperous whaling industry, which made Sandefjord the richest city in Norway. The centre of the world's modern whaling industry was located in town, and its shipowners were pioneers in modern whaling with factory ships in the Antarctic Ocean, until stocks started collapsing due to overfishing. The last southbound expeditions happened in the 1967/68 season.[1]

The city is home to many of the biggest shipowners in the country, and has built up the third-largest merchant fleet in Norway. Norway has traditionally had one of the world's biggest merchant fleets. Sandefjord is a stronghold for the Conservative Party. 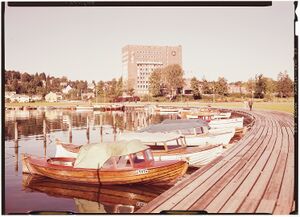 Scandic Park Hotel (formerly Rica Park Hotel) is a large hotel in Sandefjord, Norway and hosted the Bilderberg conference in May 1982.

The building was commissioned by shipowner Anders Jahre (1891-1982) and opened in 1959 under the name Hvalfangstens Hus (“The Whaling House”), then as a hotel where Jahre could hold meetings and conferences. Jahre who had made his fortune in the southern ocean whaling industry, built the - oversized for the town - hotel as a prestige project.

When it was established as Hvalfangstens Hus, the eighth floor was occupied by offices for Norges Hvalfangstforbund and other whaling organizations. The ninth and tenth floors occupied Anders Jahre's business offices, where Jahre had his legendary sumptuous executive office.

After his death in February 1982, however, there was much controversy surrounding alleged tax fraud and hidden funds in overseas accounts. In 1984, the Norwegian government put forward a tax claim against the Jahre estate.[2] A series of legal proceedings in the 2000s succeeded in returning part of the fortune to Norway from accounts on the Cayman Islands.[3]

The city is close to Torp Airport. The airport was built largely with NATO funding as one of several bases to be used by the United States Air Force in case of war. Construction started in 1953 and the airport was opened on 2 July 1956. Norway approved that seven air stations, including Torp, would have conventional ammunition storages that could be converted to nuclear weapons storage facilities in war, and allow the weapons to be transported into Norway following the declaration of war. The arsenals were built underground in bedrock with reinforced concrete. [4]

In October 1956, the military stated that they did not mind if Torp also inaugurated a civilian sector. By then the military interest in the airport had dwindled. Civilian flights commenced in 1958, and in 1960, a municipal airport company was established to run a civilian sector. The airport would have been a natural location for the Norwegian Stay Behind activities.