Scott Pruitt is an American lawyer and Republican politician from Oklahoma. He is the 14th Administrator of the Environmental Protection Agency.

WhoWhatWhy wrote in 2017 that "The Feb. 22 release of thousands of pages of emails from Scott Pruitt, approved by the Senate on Feb. 17 to head the Environmental Protection Agency (EPA), only confirms what many environmentalists feared: the Trump administration will be fossil-fuel friendly to a fault."[2]

The Washington Post said about his appointment "Scott Pruitt, longtime adversary of EPA, confirmed to lead the agency".[3] 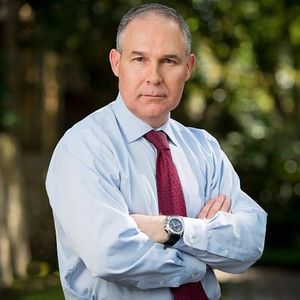