Selective enforcement is the enforcement of some policies or laws on some occasions. Given the impossibility of automating and precisely codifying the legal process, it is to a certain extent inevitable. This article focuses on its exploitation by deep state groups.

Selective enforcement is an inevitability when the number of breaches of the law exceeds the available resources to enforce the law. The legal process inevitably requires judgement calls by officials, and they need to be mindful of "national security", which sometimes presents a compelling case that otherwise compelling prosecutions should not be made.

In spite of the facade of "deregulation", the increase in the number of laws over time is well documented[citation needed] as many new laws are passed but fewer old ones repealed. The net effect is an increase in the volume and complexity of laws which increases dependence on highly trained lawyers, thus tilting the scales of justice in favour of the rich in general, and the bankers and their allies in the deep state in particular. As a result, it becomes increasingly easy for the deep state to use selective enfourcement of the law as a weapon to pursue particular targets (e.g. by combining insights from mass surveillance) or to prevent prosecution of its operatives for their crimes.

Illegally gathered evidence (such as that from universal surveillance is often legally inadmissable — that is, cannot be honestly presented in court since it is invalud if collected illegally. One solution to this difficulty is parallel construction — the creation of a fictitious official narrative about how it was gathered legally.

The "national interest" is increasingly frequently invoked to hide evidence and close down cases peremptorily, a process eased by the warlike mindset concomitant with the "war on terror" narrative. This is widely used to hide the VIPaedophile operations by the UK deep state. In 2019 an enquiry heard that an MI6 officer was sacked for child pornography, but prosecutors dropped criminal charges.[1]

Just as the commercially-controlled media has prohibited topics, so law enforcement is more or less prevented from touching certain topics of importance, or of apprehending certain personages. For example, "FBI prosecution of major child trafficking rings has been virtually non-existent."[2] Where a mass of evidence and determined victims makes such a stand down politically unacceptable, an alternative is to arrange a token prosecution via a plea deal. When faced with a mound of evidence implicating Jeffrey Epstein in 2007-8 Alexander Acosta approved a (technically illegal)[3] deal that gave a blanket immunity from prosecution to anyone else involved after being told that the case had "national security" implications.[4]

While some internet censorship can be performed by software (such as removal of sexually explicit content), artificial intelligence is still unable to understand natural language, so popular websites such as Facebook employ large numbers of personnel to remove certain stories from the internet. Websites have a de facto right to remove whatever they feel like from their site, and generally[citation needed] state as much in their terms and conditions, which are then selectively enforced as and when. 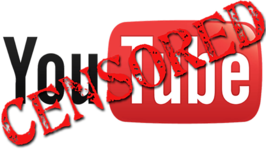 YouTube selectively enforces copyright law to remove videos from its website. Robert Stuart charges that they have been using it to remove copies of the 2013 Saving Syria's Children episode of the BBC's Panorama.