Dr. Sidney Gottlieb was born in the Bronx with the name Joseph Scheider. In 1951, Gottlieb joined the CIA. As a poisons expert, he headed the chemical division of the Technical Services Staff (TSS). He became known as the "Black Sorcerer" and the "Dirty Trickster." He supervised preparations of lethal poisons and experiments in mind control.

A stutterer from childhood, Gottlieb got a master's degree in speech therapy. He also had a club foot, but this did not stop him from practicing folk dancing, a lifelong passion. He received a Ph.D. in chemistry from the California Institute of Technology.

In April 1953 Sidney Gottlieb headed Project MKULTRA, activated on the order of CIA director Allen Dulles. Gottlieb organised the administration of LSD and other psychoactive drugs to unwitting subjects. He was involved in the financing of psychiatric research and development of "techniques that would crush the human psyche to the point that it would admit anything." He sponsored physicians such as Ewen Cameron and Harris Isbell in controversial psychiatric research that used unwitting humans as guinea pigs. Many people suffered serious adverse affects consequent on "research" financed by Gottlieb and the Rockefeller Foundation. 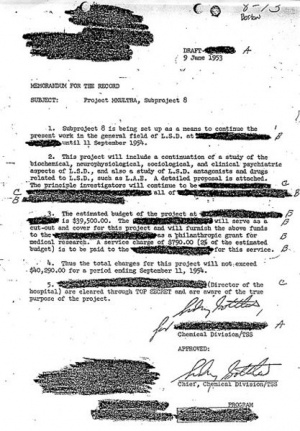 Sidney Gottlieb approval of an MKULTRA sub-project on LSD in a 9 June 1953 letter.

Stanley Glickman sued the CIA in 1981, but the trial was delayed 17 years on technical grounds, by which time Glickman had died in 1992. His sister continued the court case.

In March 1960, under The Cuban Project, a CIA plan approved by President Eisenhower and under the direction of CIA Deputy Director for Plans, Richard M. Bissell, Gottlieb came up with ideas to spray Fidel Castro's television studio with LSD and to saturate Castro's shoes with thallium so that the hair of his beard would fall out. Gottlieb also hatched schemes to assassinate Castro, including the use of a poisoned cigar, a poisoned wetsuit, an exploding conch shell, and a poisonous fountain pen.

He also tried to have Iraqi General Abdul Karim Qassim's handkerchief contaminated with botulinum. Less known was an operation within the CIA's Phoenix Program in Vietnam where a team of CIA psychologists performed mind control experiments on NLF suspects being detained at Bien Hoa Prison outside of Saigon.

Gottlieb is said to have played a role in funding investigation into paranormal phenomena, including "remote viewing".

Gottlieb also played a role in the CIA's attempt to assassinate Patrice Lumumba, Prime Minister of the Congo. In the summer of 1960, Gottlieb transported "toxic biological materials" to the CIA station in the Congo, though a military coup deposed the Prime Minister before agents could deliver the virus [1].