Sivan Kurzberg was driving the Urban Moving Systems van which was stopped by the FBI after a tip off from 'Maria' on September 11, 2001.[1] She reported seeing three young men kneeling on the roof of a white van in the parking lot of her apartment building and remarked that "They seemed to be taking a movie." She was surprised by the expressions on the men's faces. "They were like happy, you know … They didn't look shocked to me. I thought it was very strange," she said.[2]

Sivan Kurzberg was the driver of the Urban Moving Systems van in the "dancing Israelis" incident. When stopped by police on 9-11, he said "We are Israelis. We are not your problem. Your problems are our problems. The Palestinians are your problem".[2][3]. Was wearing gray and black shirt when arrested. Seen on one of the photos flicking a lighter in celebratory gesture. Was staying at 100 Lawrence St., Brooklyn, NY. [4] 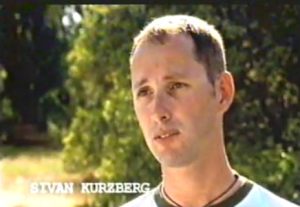