A smartphone is a mobile device that combines cellular phone and mobile computing functions into one unit. They are distinguished from "feature phones" (ie Nokia 3210, 3310, Motorola C139, etc.) by their stronger hardware capabilities and extensive mobile operating systems, which facilitate wider software, internet and multimedia functionality.

Smartphones, beside audio and video collection, contain a number of additional sensors that can be leveraged by their software (such as a magnetometer, proximity sensors, barometer, gyroscope, accelerometer, or GPS)

Early smartphones were marketed primarily towards the enterprise market, attempting to bridge the functionality of standalone personal digital assistant (PDA) devices with support for cellular telephony. The world's first smartphone was created by IBM in 1994, nicknamed "Simon". Shortcomings of the technology and connectivity did prevent proliferation of the technology at the time.

In the 2000s, several developed smartphone like the BlackBerry began to have traction. Following the rising popularity of the iPhone in the late 2000s, the absolute majority of smartphones now have copied the formfactor and usability from it. In the third quarter of 2012, one billion smartphones were in use worldwide.[1] 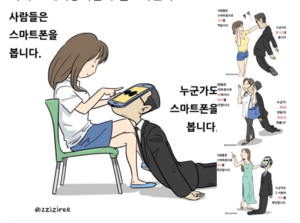 Smartphones allow a total surveillance of the user, as this South Korean cartoon illustrates

Smartphones remain very vulnerable to hacking attacks.[2][3][4][5] In addition, since at least 2014 reports surfaced about devices that were delivered with pre-installed malware in the firmware, a so called hardware backdoor.[6][7]

Increasing Internet use via Smartphone

Smartphones are about to replace Desktops (PC/Monitor) as the main way to use the Internet,[8][9][10] while the usage of social media already happens mostly on smartphones.[11][12] This has implications for how content from webpages must be presented to the viewer. The smaller screen does not allow for more complex information and graphical data at once (it has to be optimized for viewing on a smartphone), which likely leads to fewer views of webpages that do not offer another version optimized for mobile viewing and/or that present more text to read in general.