Social control is an interest of deep politicians with long term aspirations, be they dystopian or utopian.

For most people in the world, in the late 20th century, the commercially-controlled media was highly influential in shaping their worldview, with television being a key tool in the process. The rise of the internet is changing this, and strenuous efforts are being made by the establishment to increase internet censorship.

Since WW2, Operation Gladio has applied a strategy of tension, most notably in Italy but also in other countries, to promote fear an uncertainty and render the population pliable. This has been ramped up since 9-11 and the 21st century has seen a spate of false flag attacks used to promote the idea of a worldwide "war on terror". The original Gladio has been replaced by Gladio B, demonising "Muslim terrorists".

In China the so called "social Credit" System has combined large scale surveillance with aversive conditioning. [2]

China's Orwellianism has been called a reference for ID2020, a Bill Gates global biometric tagging project and Chinese specialists took part in Event201 which eventually modeled implementation for such measures.[citation needed]

Similar to China, in the US and its 'allies' behavioral science insights are used to "better serve the people." (Obama) [3] , i.e. occasional rewards and punishments in the vicious form of ostracism aka a feeling of social exclusion and guilt or even shame .[4] The system is praised in that it changes how people behave in predictable ways “without forbidding any options or significantly changing their economic incentives.” The author fails to mention that such manipulative measures foster dependency and passivity, lower self esteem and are more painful than paying a fine. They might fly under the radar, however, operating in stealthy and covert ways.

“How Do You Get Manipulated? Manipulative relationships depend on activating one (or both) of two principal human drives: gain (or reward) and loss (or avoidance). These are the two engines that drive the manipulation. Do not bother looking for anything more complicated than this: Manipulation always boils down to the promise of a net gain and/or the threat of a net loss.”
Harriet Braiker (2003)  [5]

Manipulation is different from — and should not be confused with — legitimate, direct, above-board inﬂuence. In contrast to openly announced influence (i.e. monetary incentives), manipulative social control thrives in an atmosphere of indirect, devious, and even deceptive communication. Agendas frequently are hidden and purposes disguised. Threats, intimidation, and coercion are preferred tactics. Manipulators seek the opportunity to ensnare and entrap their victims. They often proceed in subtle, devious, or covert ways so that the manipulative character of the relationship is well established long before its true nature becomes apparent. 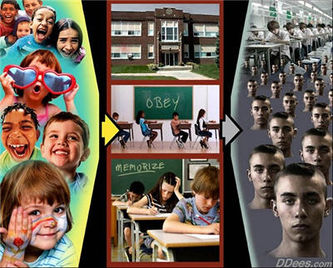 School is the primary means of social control of the young. School whistleblower John Taylor Gatto documented a concerted effort to extend childhood in his Underground History of American Education which details a decision made by managers in the second half of the 19th century to use mass compulsion schooling to handicap the intellectual development of the masses. He states that "adolescence" is a modern concept, and cites the example of David Farragut who was commissioned a midshipman in the United States Navy before he was a teenager, and in the War of 1812 was even put in charge of a captured vessel, the Essex.[6][7]

In March 2015 Child Protective Services found Danielle and Alexander Meitiv guilty of "unsubstantiated child neglect" after they admitted allowing their children, ages 6 and 10 years old, to walk home alone from a park less than one mile from their house. Maryland laws stated that kids must be accompanied by an adult until they reach age 13.[8]

Advertisements have been used to try to deter particular behaviours.

Advertisements for tobacco products were banned in many countries.[When?] Later, a health warning on the packages was mandated. Later still, this was illustrated with a graphic image, for example, of a victim of lung cancer.

Research into new methods of social control is ongoing. In UK in 2019, the UK Home office introduced messages on boxes of fried chicken, reportedly intended to deter knife crime.[9]

Monetisation arguably represents one of the most important and widespread means of social control.

Alcohol and tobacco products are heavily taxed in most countries.

Various products have been subsidised, either to motivate consumption, alleviate hardship or for more complex reasons. For example, in the UK, mortgage tax relief motivated people to take out large, long term mortgages.