Although formed in 1951 as a successor to the Labour and Socialist International it has antecedents to the late 19th Century. Initially dominated by parties from Western Europe, it has grown to include more than 160 member parties from more than 100 countries. Its members have governed in many countries including most of Europe.

The Party of European Socialists is an associated organisation of the Socialist International, as is its European parliamentary group, the Progressive Alliance of Socialists and Democrats.

The current SI President is the former Prime Minister of Greece, George Papandreou. Among the sixteeen Honorary Presidents of the Socialist International is former Labour Party leader Neil Kinnock.[3]

In July 2018, the Council of the Socialist International (SI) called for Boycott, Divestment and Sanctions (BDS) for Palestinian rights at their meeting in the United Nations in Geneva on June 26-27. SI also called for a “total embargo on all forms of military trade and cooperation with Israel.”

SI reaffirmed the Palestinian people’s right to self-determination and called on governments and civil organisations to “activate Boycott, Divestment and Sanctions (BDS) against the Israeli occupation.” It called for the “total embargo on all forms of military trade and cooperation with Israel as long as it continues its policies of occupation and Apartheid against the people of Palestine.”

SI strongly condemned Israel’s “racist laws,” and expressed its solidarity with Palestinian citizens of Israel, who “continue to live under a system of institutionalised discrimination.”[4] 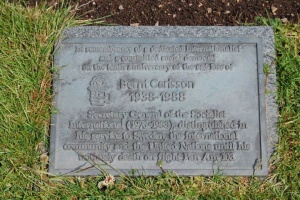 Bernt Carlsson's Memorial in Dryfesdale Cemetery "In remembrance of a dedicated internationalist and a committed social democrat on the tenth anniversary of the sad loss of Bernt Carlsson (1938-1988), Secretary-General of the Socialist International (1976-1983), distinguished in his service to Sweden, the international community and the United Nations until his untimely death on flight Pan Am 103."

During the post-World War II period, the SI aided social democratic parties in re-establishing themselves when dictatorship gave way to democracy in Portugal (1974) and Spain (1975). Until its 1976 Geneva Congress, the SI had few members outside Europe and no formal involvement with Latin America.[5] In the 1980s, most SI parties gave their backing to the Sandinista National Liberation Front in Nicaragua (FSLN), whose left-wing government had incited enmity from the United States.

In the late 1970s and in the 1980s the Socialist International had extensive contacts and discussion with the two leading powers of the Cold War period, the United States and the Soviet Union, on issues concerning East-West relations and arms control. The SI supported détente and disarmament agreements, such as SALT II, START I and Intermediate-Range Nuclear Forces Treaty (INF). They had several meetings and discussions in Washington, D.C. with President Jimmy Carter and Vice President George H W Bush and in Moscow with General Secretary of the Communist Party of the Soviet Union Leonid Brezhnev and Mikhail Gorbachev. The SI's delegations to these discussions were led by the Prime Minister of Finland Kalevi Sorsa.[6]

Since then, the Socialist International has admitted as member parties not only the FSLN but also the left-wing Puerto Rican Independence Party, as well as former Communist parties such as the Democratic Party of the Left of Italy and the Front for the Liberation of Mozambique (FRELIMO).

Following the Tunisian revolution, the Constitutional Democratic Rally was expelled from the SI in January 2011. Later that month, the Egyptian National Democratic Party was also expelled. As a result of the 2010–2011 Ivorian crisis, the Ivorian Popular Front was expelled in March 2011. However, according to section 5.1.3 of the statutes of the Socialist International, an expulsion requires a decision of Congress by a majority of two-thirds.[7]

On 22 May 2013, the Social Democratic Party of Germany (SPD) along with other social-democratic political parties founded a rival organisation to the Socialist International known as the Progressive Alliance, out of criticism of the perceived corrupt and outmoded nature of the SI.[8][9][10][11]

The following parties are full members:

This page imported content from Wikipedia on 2 January 2014.
Wikipedia is not affiliated with Wikispooks.   Original page source here
Retrieved from "https://wikispooks.com/w/index.php?title=Socialist_International&oldid=147368"
Category: