From Wikispooks
< South Africa
Jump to navigation Jump to search

The Wilson Center digital archive covers nearly twenty-five years of South African nuclear policy, shedding new light on the country’s unique nuclear history, from early uranium supply arrangements under the United States-South Africa Atomic Energy Bilateral to the South African response to the September 1979 Vela Incident, through the early 1990s when it announced the existence and subsequent destruction of its nuclear weapons program.[1]

In 1993, South African President F W de Klerk publicly announced that South Africa had developed nuclear weapons. In 1988 South Africa signed the Tripartite Accord with Cuba and Angola, which led to the withdrawal of South African and Cuban troops from Angola and independence for Namibia. The pre-emptive elimination of nuclear weapons was expected to make a significant contribution toward regional stability and peace, and also to help restore South Africa's credibility in regional and international politics. Officially, South Africa's nuclear bombs were said to have been "dismantled"[2][3], and South Africa acceded to the Treaty on the Non-Proliferation of Nuclear Weapons when South African Ambassador to the United States Harry Schwarz signed the treaty in 1991. On 19 August 1994, after completing its inspection, the International Atomic Energy Agency (IAEA) confirmed that one partially completed and six fully completed nuclear weapons had been dismantled. As a result, the IAEA was satisfied that South Africa's nuclear programme had been converted to peaceful applications.[4] This may or may not have been the whole story. 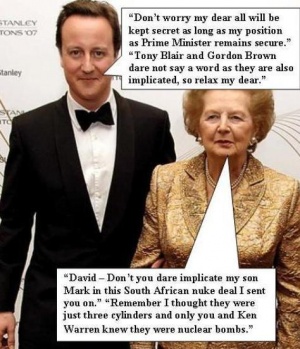 In what has been described as a sanctions-busting trip, a youthful David Cameron visited South Africa in 1989 accompanied by Conservative MP, Sir Kenneth Warren[5] and nuclear weapons inspector, Dr David Kelly who in several earlier visits had been given access to South Africa's nuclear weapons research facility at Pelindaba, near Pretoria.[6] The purpose of David Cameron's trip was to arrange for three of South Africa's nuclear weapons to be shipped to Oman, where the nukes would be stored in case they were required in Iraq. The remaining six nukes were destined to travel from South Africa to Chicago in the US. The next phase of the operation was that, once the weapons had left South African soil, the British Government would reimburse the South African firm Armscor and the British firm Astra through the middle man John Bredenkamp. In order to keep this out of Parliament and out of the public domain, Margaret Thatcher was asked to sign off these weapons under a special Urgent Operational Requirement (UOR) describing them as metal cylinders rather than nuclear bombs. The UOR document was signed just before Mrs Thatcher left office in late 1990.[7] It was subsequently revealed that £17.8 million was siphoned from this secret nuclear deal into Conservative Party funds.[8] This narrative was the basis of the Facebook page "David Cameron and the Missing Nukes" in July 2012.[9]

On 7 February 2015, the Daily Mail announced that David Cameron had leaked details from the as yet unpublished Iraq Inquiry report which "will be a 'devastating' indictment of the Blair Government".[10]

On 8 February 2015, it was revealed that the Chilcot Inquiry had been tasked specifically with tracking down those responsible for “misplacing” the three South African nukes 25 years ago. Both David Cameron and Dr David Kelly are understood to have been involved in the diversion of these WMD which eventually became the pretext for the Iraq War.[11]

David Albright also reported that although President P W Botha had limited the number of South Africa's nuclear weapons to seven in 1985, it was estimated that those gun-type devices had enough Highly Enriched Uranium (HEU) to produce as many as fourteen nuclear bombs.[19]

In September 1979 a US Vela satellite detected a double flash over the Indian Ocean that was suspected, but never confirmed to be a nuclear test, despite extensive air sampling by Boeing WC-135 Constant Phoenix aircraft of the United States Air Force. If the Vela Incident was a nuclear test, South Africa is one of the countries, possibly in collaboration with Israel, that is suspected of carrying it out. No official confirmation of its being a nuclear test has been made by South Africa, and expert agencies have disagreed on their assessments. In 1997, South African Deputy Foreign Minister Aziz Pahad stated that South Africa had conducted a test, but later retracted his statement as being a report of rumours.[20]

On 5 April 1995, South Africa joined the Nuclear Suppliers Group as a full member and went on to play a leading role in the establishment of the African Nuclear Weapon Free Zone Treaty (also referred to as the Treaty of Pelindaba) in 1996, becoming one of the first members in 1997. South Africa also signed the Comprehensive Nuclear Test Ban Treaty in 1996 and ratified it in 1999.[21]

The Treaty of Pelindaba, which came into effect on 15 July 2009 once it had been ratified by 28 countries, required parties not to engage in the research, development, manufacture, stockpiling acquisition, testing, possession, control or stationing of nuclear explosive devices in the territory of parties to the treaty and the dumping of radioactive wastes in the African zone by treaty parties. The African Commission on Nuclear Energy, in order to verify compliance with the treaty, was established and headquartered in South Africa.[22] 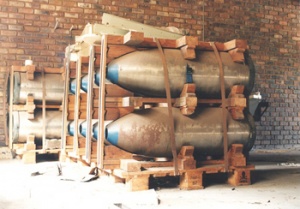