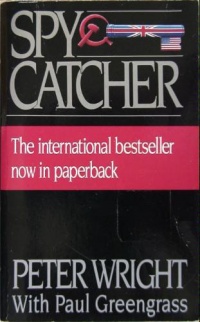 Spycatcher: The Candid Autobiography of a Senior Intelligence Officer is a book written by Peter Wright, former MI5 officer and Assistant Director, and co-author Paul Greengrass.

Spycatcher was published first in Australia. Its allegations proved scandalous on publication, but more so because the British Government attempted to ban it, ensuring its profit and notoriety.[1]

Cabinet Secretary Robert Armstrong is credited with bringing the phrase "economical with the truth" into popular usage, after he used it during the Spycatcher trial in 1986.

In Spycatcher, Wright states that he was assigned to unmask a Soviet mole in MI5, and claims that the mole was Roger Hollis — a former MI5 Director General; it also describes people who might have or might not have been the mole; and narrates a history of MI5 by chronicling its principal officers, from the 1930s to his time in service.

Moreover, Spycatcher tells of the MI6 plot to assassinate President Nasser during the Suez Crisis; of joint MI5-CIA plotting against left-wing British Prime Minister Harold Wilson (secretly accused of being a KGB agent by the Soviet defector Anatoliy Golitsyn); and of MI5's eavesdropping on high-level Commonwealth conferences. [2]

Wright examines the techniques of intelligence services, exposes their ethics (speculative until that time), notably their "eleventh commandment", "Thou shalt not get caught", and explains many MI5 electronic technologies (some of which he developed), for instance allowing clever spying into rooms, and identifying the frequency that a superhet receiver is tuned to. In the afterword, he states that writing Spycatcher was motivated principally to recuperate pension income lost when the British government ruled his pension un-transferable for earlier work in GCHQ, a ruling that severely reduced his pension.

Wright wrote Spycatcher in Tasmania, after his retirement from MI5. He first attempted publication in 1985.[3] The British government immediately acted to ban Spycatcher in the UK. Since the ruling was obtained in an English court, however, the book continued to be available legally in Scotland, as well as other jurisdictions.

The UK government also attempted to halt the book's Australian publication, but lost that action in 1987; its legal costs were estimated at £250,000.[4] It appealed but again lost in June 1988.

English newspapers attempting proper reportage of Spycatcher's principal allegations were served gag orders; on persisting, they were tried for contempt of court, although the charges were eventually dropped. Throughout all this, the book continued to be sold in Scotland; moreover, Scottish newspapers were not subject to any English gag order, and continued to report on the affair. Quantities of the book easily reached English purchasers from Scotland, while other copies were smuggled into England from Australia and elsewhere. A notable television report at the time featured a reporter flying to Australia, then flying back into England with ten copies of the book which he declared to Heathrow airport's customs officers. After some discussion, he was allowed to continue his carriage of the books into England, as they had been given no specific instructions to confiscate them.

In mid-1987, a High Court judge lifted the ban on English newspaper reportage on the book, but in late July, the Law Lords again barred reportage of Wright's allegations.[5][6] The Daily Mirror published upside-down photographs of the three Law Lords, with the caption 'YOU FOOLS'. British editions of The Economist ran a blank page with a boxed explanation that

"In all but one country, our readers have on this page a review of 'Spycatcher,' a book by an ex-M.I.5-man, Peter Wright. The exception is Britain, where the book, and comment on it, have been banned. For our 420,000 readers there, this page is blank – and the law is an ass."[7]

Eventually, in 1988, the book was cleared for legitimate sale when the Law Lords acknowledged that overseas publication meant it contained no secrets. However, Wright was barred from receiving royalties from the sale of the book in the United Kingdom. In November 1991, the European Court of Human Rights ruled that the British government had breached the European Convention of Human Rights in gagging its own newspapers.[8][9]

Malcolm Turnbull, later Communications Minister for Australia's Abbott Government, was the lawyer who overcame the British government's suppression orders against Spycatcher. The book has sold more than two million copies. In 1995, Wright died a millionaire from profits of his book.[10]

The concepts and use of public key infrastructure (PKI) were discovered by James H. Ellis and British GCHQ scientists in 1969. After the re-discovery and commercial use of PKI by Ron Rivest, Adi Shamir, Whitfield Diffie and others, the British government considered releasing the records of GCHQ's successes in this field. However, the untimely publication of Spycatcher meant that the government once again issued a gag order and full details of GCHQ achievement were never revealed. Richard Walton from GCHQ later said "It was a time when the government security market was expanding beyond the traditional military and diplomatic customer, and we needed to capture the confidence of those who did not traditionally deal with us. We were in the middle of Thatcherism, and we were trying to counter a sort of 'government is bad, private is good' ethos. So, we had the intention of publishing a paper, but that idea was scuppered by that blighter Peter Wright, who wrote Spycatcher."[11]

This page imported content from Wikipedia on 14 August 2015.
Wikipedia is not affiliated with Wikispooks.   Original page source here
Retrieved from "https://wikispooks.com/w/index.php?title=Spycatcher&oldid=97453"
Category: