Steven Dale Green was a former Private First Class in the United States Army who was convicted of gang-raping and murdering a 14-year-old Iraqi girl, Abeer Qassim Hamza al-Janabi and murdering her family inside their house in the village of Mahmudiyah. He then set fire to the house before leaving with his 4 accomplices.

Green was charged, and sentenced by the US civilian justice system to life sentences without parole. Found dead in his cell in February 2014, he was adjudged to have committed suicide.[1] Green was the first former GI to be charged under the 2000 Act.

Green grew up in Seabrook, Texas and moved to Midland, Texas when he was 14. According to school officials, he dropped out of high school in 2002 after completing the 10th grade and moved to Denver City, Texas, where he earned his high school equivalency in 2003. Days after a January 2005 arrest for alcohol possession, Green enlisted in the U.S. Army. In doing so, he was granted a moral character waiver for prior drug and alcohol related offenses that might have otherwise disqualified him. Green graduated from Infantry Training Brigade and was assigned to the 1st Battalion, 502nd Infantry Regiment, 2nd Brigade, 101st Airborne Division (Air Assault), Fort Campbell, Kentucky. According to a military spokesperson and a criminal complaint filed in connection with the charges, Green was honorably discharged from the military "due to antisocial personality disorder but before the military was aware of the incident."[2] Green was stationed in Iraq from September 2005 to April 2006 and discharged in May 2006.[3] 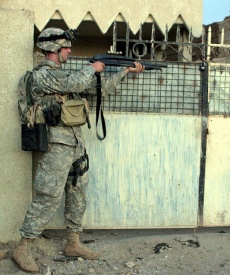 On 30 June 2006, the FBI arrested Green, who was held without bond and transferred to Louisville, Kentucky. On 3 July 2006, United States Federal Court prosecutors formally charged him with raping and killing Abeer Qassim Hamza al-Janabi, a 14-year-old girl, and with killing her six-year-old sister Hadeel, her father, Qassim Hamza Rasheed, and her mother, Fakhriya Taha Muhasen in Mahmoudiyah, on 12 March 2006. On July 10, the U.S. Army charged four other active duty soldiers with the same crime. A sixth soldier, Sgt. Anthony Yribe, was charged with failing to report the attack, but not with having participated in the rape and the murders.

Green and four other soldiers, Sgt. Paul E. Cortéz, Spc. James P. Barker, Pfc. Jesse V. Spielman, and Pfc. Brian L. Howard, had planned raping Abeer Qassim Hamza. Pfc. Howard was ordered to monitor radio traffic while the others entered the Hamza family's house. Green ordered the father, mother, and younger daughter to a bedroom and shot them, saying: "I just killed them; all are dead." Green, and at least one other soldier, raped Abeer Qassim Hamza, after which Green shot her in the face two or three times. Five soldiers, including Green, were formally charged with raping the girl and murdering her parents and little sister. Cortéz, Barker, Spielman, and Howard accepted plea bargains.[4]

Reportedly, Fakhariya Taja Muhassain worried that her daughter, Abeer, had attracted the unwanted attention of U.S. soldiers at the checkpoint near their home. She asked her neighbor, Omar Janabi, if she could sleep in his daughter's room at his house. Janabi agreed, but the Hamza family were murdered the next day.[5] Janabi, who said he discovered the Hamza family bodies, found the husband, the wife, and the younger, six-year-old daughter in one room, all shot dead. In another room of the Hamza house, Janabi found Abeer Qassim Hamza's burned body.

On 6 July 2006, Green entered a plea of not guilty through his public defenders. U.S. Magistrate Judge James Moyer set an arraignment date of August 8 in Paducah, Kentucky.[6]

On 11 July 2006, his lawyers requested a gag order. "This case has received prominent and often sensational coverage in virtually all print, electronic and Internet news media in the world." "Clearly, the publicity and public passions surrounding this case present the clear and imminent danger to the fair administration of justice," said the motion.[7] Prosecutors had until 25 July to file their response to the request.[8]

On 31 August 2006, a federal judge rejected a gag order. U.S. District Judge Thomas Russell said there is "no reason to believe" that Green's right to a fair trial would be in jeopardy. Furthermore he added, "It is beyond question that the charges against Mr. Green are serious ones, and that some of the acts alleged in the complaint are considered unacceptable in our society."[9]

In July 2007, federal prosecutors, led by Brian Skaret of the United States Department of Justice's Domestic Security Section, announced they will be seeking the death penalty for Green. This is based on the fact that prosecutors believe the rape and killings were premeditated, and were committed using a firearm.

The prosecution of this case is unique in that although the alleged crimes were committed by an active member of the United States military, which normally would fall under the jurisdiction of the military court system, Green was indicted and arrested after he had been discharged from the Army. Thus, the case is being tried instead by the United States Department of Justice's Domestic Security Section.

Opening arguments in Green's trial were heard on April 27, 2009.[10] The prosecution rested its case on May 4, 2009.[11] On May 7, 2009, a federal jury convicted Green of rape and murder, for which he could have received the death penalty.[12] However, on May 21, 2009, Green was spared the death penalty when the jury of nine men and three women couldn't come to unanimous agreement on a penalty; as a result, he will receive life without parole.[13] Formal sentencing is scheduled for September 4, 2009.[14]

Some said the jury's indecision may indicate that the public is becoming increasingly aware of combat stress and its effects on soldiers.[15] Green's defense attorneys argued against the death penalty, presenting military witnesses who testified that Green's unit suffered unusual stress and heavy casualties, and had insufficient Army leadership.[14]

Green's Army comrades, who were charged in the US military justice system, also received heavy sentences, Cortez being sentenced to 110 years — but, unlike Green they were eligible for parole in 2015.[16] Green told the Associated Press that he felt he was being punished more severely than his comrades, since he faced multiple life sentences without parole, whereas they could be released on parole after serving less than a decade.

According to Acts of War, the play 9 circles was inspired by Green's life.[17] CBS News quoted Green's lawyers, after his death, reportedly of suicide, that Green had been looking forward to being interviewed by a documentary film-maker.