The strategy of tension is an umbrella term used for longer term campaigns of operations by governments aimed at destabilising or unsettling target populations or states, for example a series of false flag attacks.

The strategy of tension is a method of social control involving a series of covert attacks upon a population, intended to promote stress and fear amongst them. The purpose is, by inducing a mistrust of one another and of the world at large, to increase child-like dependence upon perceived authority figures (such as national governments). The English phrase originates from the Italian (strategia della tensione), which was first applied to Operation Gladio in Italy during the years of lead.

“When you were on the Right you were not supposed to attack the State or its representatives. You were supposed to attack civilians, women, children, innocent people from outside the political arena. For one simple reason: To force the Italian public to turn to the State turn to the regime and ask for greater security. This was precisely the role of the right in Italy. It placed itself at the service of the State which created a strategy aptly called the "Strategy of Tension" in so far as they had to get ordinary people to accept that at any moment over a period of 30 years, from 1960 to the mid eighties a state of emergency could be declared. So, people would willingly trade part of their freedom for the security of being able to walk the streets, go on trains or enter a bank. This is the political logic behind all the bombings. They remain unpunished because the state cannot condemn itself.”
Vincenzo Vinciguerra [1]

The methods used are most obviously illegal and violent i.e. assassinations, kidnapping, paramilitary operations but also include propaganda, economic sanctions, support of civil unrest, fake grassroots movements, promotion of disruptive memes or technologies and the escalation of formerly peaceful protests by use of agents provocateurs. These are typically carried out under a false flag and combined with disinformation and use of enemy images to demonise uninvolved third party. If state agencies engage in staging or promoting acts of terrorism the term "state terrorism" is used, e.g. by former German chancellor Helmut Schmidt.[2]

Strategy of tension operations are potentially disastrous if uncovered, so require a high level of secrecy to afford their perpetrators plausible deniability. To be effective, they must be sustained, and they are therefore the preserve of intelligence agencies, the military or national governments. Organizations used are infiltrated and controlled but not directly affiliated with their controllers (e.g. Propaganda Due, Ordine Nuovo, ISIS, ...). Nevertheless, some government-backed strategies of tension have been uncovered since WW2.

The PsyOp component of a strategy of tension 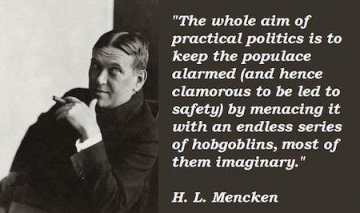 The main target of a strategy of tension is the public opinion, to manipulate votes, created a casus belli to legitimate a war, to call for a strong leader or roll out mass surveillance and denounce peacemakers as 'unpatriotic'. False flag terrorist attacks are just the tip of the iceberg of possible measures to achieve these goals. In fact any scare tactic will do.

In "Interdoc and West European Psychological Warfare", Giles Scott-Smith puts the strategy of tension in a broader context.

“Ultimately, Interdoc’s value comes from it being a remarkable example of the way European security services sought to engage with and manipulate the public sphere, initially out of serious concerns for the effects of peaceful coexistence on Western ideological solidity, and eventually as a means to secure a strategic advantage in the Cold War.”
Giles Scott-Smith (2011)  [3]

Based on official statements he shows that prolonged periods of peace are seen as a threat to Western power structures, the established order and political 'stability' by the establishment (i.e. threat to multibillion profits).

The proposed 'solution' to this is - in the propagandists phrasing - to "raise awareness" of external threats or to "encourage a responsible citizenry as part of the process of maintaining a democratic society". The result may be called fine-tuning of democracy and included staged terror attacks under a false flag in the past.

The same rhetoric is put forward by the Joint Statement of European Ministers of the Interior after the Charlie Hebdo terrorist attack:

“In order to tackle the root causes of radicalization ("Radicalization" refers to a value shift towards fovouring a more equal distribution of wealth) in particular of young people, the EU should consider strengthening targeted actions designed to raise awareness and promote the respect of fundamental rights and values".”
European Ministers of the Interior (2015)  [4]

Daniele Ganser is a scholar who investigated the strategy of tension in his phd and books.

“It is probably fair to say that of the roughly seven billion people who live on our planet today, far less than one percent has ever heard of the "strategy of tension." And only a very few of these could illustrate the strategy with specific historical examples. It is indeed a strategy of a shadow world, known only to a few military and intelligence officers (and some criminals) who have carried it out, a few police officers and judges who fought against it, and a handful of journalists and academics who have written about it.

In its essence, the strategy of tension targets the emotions of human beings and aims to spread maximum fear among the target group. “Tension” refers to emotional distress and psychological fear, whereas “strategy” refers to the technique of bringing about such distress and fear. A terrorist attack in a public place, such as a railway station, a market place, or a school bus, is the typical technique through which the strategy of tension is implemented. After the attack — and this is a crucial element — the secret agents who carried out the crime blame it on a political opponent by removing and planting evidence.

It must be noted that the targets of the strategy of tension are not the dead and the wounded of the terrorist attacks, as many might assume. The targets are the political opponents, who are discredited through the attack, and those who remain unharmed but learn of the attack, thereby coming to fear for their lives and those of their loved ones. Since the aims of the strategy are to discredit opponents and to create fear, the real targets are not the people who were killed, whether they number in the dozens or even thousands, but the millions of people who survive physically unharmed but emotionally distressed.”
Daniele Ganser (May 2014)  [5]

Through the strategy of tension people learn to expect that something "bad" will happen in the near future, something which can not be controlled and that happens intermittently. In behavioral psychology this is a special case of operant conditioning which is associated with dependence or addiction - dependence on (political) leaders in this case, who promote a "solution" to "rescue" people from their distressed state.

A normal reaction when an expected event happens is a release of tension - even if it is troublesome - including release of endogenous opiates. [6]

Thus people can learn to enjoy pain and may get addicted to violence or trained to accept violence to cope with stress and anxiety. The ambivalence of joy and pain, however, leads to confusion and regression into earlier coping mechanisms such as splitting [7] and projection. It may be used to install enemy images and direct anger and aggression towards designated culprits.

“It can be regarded as a stroke of genius on Hitler's part that for purposes of projection he offered the Jews to the Germans, who had been brought up to be self-controlled and obedient and to suppress their feelings. But the use of this mechanism is by no means new. It can be observed in most wars of conquest, in the Crusades, and in the Inquisition, as well as in recent history.”
Alice Miller (1983)  [8]

Another effect of scare tactics is that people turn towards their leaders - even if these are violent:

"People in general, and children in particular, seek increased attachment in the face of external danger. Pain, fear, fatigue, and loss of loved ones and protectors all evoke efforts to attract increased care and most cultures have rituals designed to provide it.

When there is no access to ordinary sources of comfort, people may turn toward their tormentors. Adults as well as children may develop strong emotional ties with people who intermittently harass, beat, and threaten them. Hostages have put up bail for their captors, expressed a wish to marry them, or had sexual relations with them; abused children often cling to their parents and resist being removed from the home; inmates of Nazi prison camps sometimes imitated their captors [...]." Bessel v.d. Kolk [6]

The extraordinary need for attachment and protection in the face of danger may explain why there is so little public outcry when false flags are made public. The ambivalence and confusion when protective figures are simultainously a source of terror

"lead to hyperarousal states for which the memory can be state-dependent or dissociated, and this memory only returns fully during renewed terror. This interferes with good judgment about these relationships." Bessel v.d. Kolk [6]

Thus the idea that parts of a democratic state may be involved in acts of state terrorism may be split off and denied as a psychological defense of basic beliefs. Especially under conditions of isolation or social distancing tormentors come to be viewed simultaneously as "rescuers" in a regressed state of child-like dependence or learned helplessness.

Recognizable patterns include, but are not limited to:

11 February 2019 Robin  An important topic
A reasonable overview of this undermentioned topic.