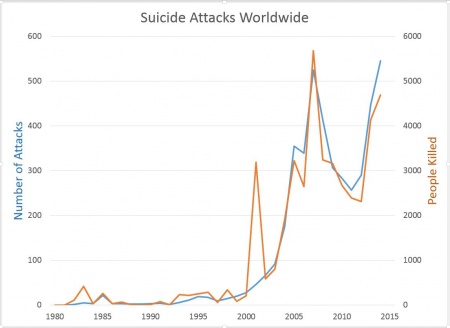 As of April, 2016 Wikipedia's article on "Suicide Bomber" features a prominent photo of the attacks of September 11, 2001 and a somewhat bewildering amount of detailed facts and figures and notes the "high percentage of suicide attacks executed by Islamist groups since 1980". It does not mention false flag attacks, or the possibility that supposed suicide bombers may be patsies.[1]

In light of the official narrative about a sharp rise in suicide attacks since 1980, it is interesting to note that in 1979 the Jerusalem Conference on International Terrorism brought together about 700 people interested in "terrorism", mostly from Israel, US and UK. Speakers included several members of Le Cercle and other spooks connected to the "war on terror" such as George H. W. Bush.

As contrasted with classical suicide attacks such as Japanese kamikaze pilots, Tony Gosling has detected a shift in the suicide meme. He observed after the 2016 Mass murder in Brussels that the public is increasingly being told by the commercially-controlled media that Islamic suicide bombers are ready to push a bomb around on an airport trolley and died as it explodes even though they could just walk off and live if they wanted to.

Sibel Edmonds writes in her roman-a-clef, The Lone Gladio about how spooks groom suicide bombers for carrying out False Flag attacks.

Tony Gosling has identified a shocking lack of rigour among Western journalists of the commercially-controlled media when it comes to fact checking facts of authorities' claims that bomb were set off by suicide bombers. He wrote in 2005 that "The BBC crossed a lethal professional line when it decided to refer to the four 7/7 suspects as 'suicide bombers'. Ignored is inconvenient evidence including the advance warning to the Israeli embassy and the untidily Photoshopped Luton CCTV image (a railing behind the figure at the back passes in front of his arm)." He wrote in the National Union of Journalists magazine in Jan/Feb 2007:

The media should not call people 'suicide bombers' without real evidence A professional journalistic blunder is committed with almost every new story of a "suicide bomber". Whether a bomb explodes accidentally, by remote control or if a "bomber" believes he has a shipment of cocaine in his bag he's still most likely to be termed a "suicide bomber" in the news. [2]