On 14 November 1977, Tam Dalyell asked during a House of Commons debate over Scottish and Welsh devolution:

He illustrated his point by pointing out the absurdity of an MP for West Lothian being able to vote on matters affecting the English town of Blackburn, Lancashire, but not Blackburn, West Lothian, in his own constituency. The name "West Lothian Question" was coined by the Ulster Unionist MP Enoch Powell in his response to Dalyell's speech:

"We have finally grasped what the Honourable Member for West Lothian is getting at. Let us call it the "West Lothian Question".[1][2]

Born in Edinburgh,[3] but raised in his mother Nora Dalyell's family home, The Binns, near Linlithgow, West Lothian; his father (Percy) Gordon Loch, C.I.E., was an Empire civil servant (Political Agent) and a scion of the Loch family. His father took his wife's maiden name in 1938, and through his mother he inherited the baronetcy of the Binns in 1972, although he never uses the title.

Tam Dalyell was educated at the Edinburgh Academy and Eton College and did his National Service with the Royal Scots Greys from 1950 to 1952 – as an ordinary trooper, after failing his officer training. He then went to King's College (Cambridge) to study History and Economics, where he was Chairman of the Cambridge University Conservative Association, and Vice-President of the Cambridge Union Society but failed to be elected to its presidency. He then trained as a teacher at Moray House College in Edinburgh and taught at Bo'ness Academy and a ship school. He joined the Labour Party in 1956 after the Suez Crisis. He has been a columnist for the New Scientist magazine since 1967. Recently he has also been a strong supporter of Classical subjects (Greek and Roman studies) in higher education.

Tam Dalyell became a Member of Parliament in June 1962, when he defeated William Wolfe of the Scottish National Party in a hard fought by-election for West Lothian. From 1983 onwards, he represented Linlithgow (when the new town of Livingston split off to form its own constituency) and easily retained his position as their representative. He became Father of the House after the 2001 General Election, when Sir Edward Heath retired. He was a Member of the European Parliament from 1975 to 1979, and a member of the Labour National Executive from 1986 to 1987 for the Campaign group.

Dalyell's independent stance in Parliament ensured his isolation from significant committees and jobs. His early career was promising and he became Parliamentary Private Secretary (PPS) to Richard Crossman, but he annoyed a number of ministers and was heavily censured by the Committee on Standards and Privileges for a leak about the biological weapons research establishment Porton Down to the newspapers (though he claimed that he thought the minutes were in the public domain). When Labour failed to hold power in 1970 his chances of senior office were effectively over. He was opposed to Scottish devolution and first posed the famous "West Lothian question", although it was given its name by Enoch Powell. He continued to argue his own causes: in 1978 to 1979 he voted against his own government over 100 times, despite a three-line whip.

Dalyell is vocal in his disapproval of imperialism. Beginning with his opposition to action in Borneo in 1965, he has contested almost every British action – arguing against action in Aden, the depopulation of Diego Garcia, the Falklands War (especially the sinking of the General Belgrano), the Gulf War, and action in Kosovo and Iraq, saying, "I will resist a war with every sinew in my body". When invited by a television journalist to rank Tony Blair among the eight prime ministers he had observed as a parliamentarian, he cited policy over Kosovo and Iraq as reasons for placing Blair bottom of the list.

In October 1994, MP Tam Dalyell submitted documents to parliament that he claimed proved Mark Thatcher was also involved and received a £12 million commission on the Al-Yamamah arms deal‎ signed off by his mother while she was UK Prime Minister. The Public Accounts Committee (United Kingdom) decided not to investigate.

Tam Dalyell was also a strong presence in Parliament concerning Libya and led no fewer than 17 adjournment debates on the Lockerbie bombing,[4] in which he repeatedly demanded answers by the government to the reports of Hans Köchler, United Nations observer at the Lockerbie trial.[5]

In 1995, Tam Dalyell asked the Lord Advocate, Lord Rodger of Earlsferry, to grant diplomatic immunity to Lester Coleman, a co-author of "Trail of the Octopus", so that he could give evidence in the Lockerbie bombing trial in Scotland; the Federal Government of the United States had indictments against Coleman, accusing him of passport fraud and perjury. Allan Stewart, a former Scotland Office minister and Conservative Party MP for Eastwood, also said that Coleman should be granted immunity so he could testify in Scotland. The Lord Advocate rejected Dalyell's plea, saying that the Home Office and the English courts have the jurisdiction over the US government's extradition demand regarding Coleman, and that the Crown Office and the Scottish Office had no authority over the case.[6] Dalyell later said "I had contact with Les Coleman 10 years ago. In my opinion, though he has a chequered history, I take him seriously."

In October 2008, intelligence reports emerged suggesting that Lockerbie bombing suspect Abu Nidal was a US agent. Apparently drawn up for Saddam Hussein's security services, the reports said the Kuwaitis had asked Abu Nidal (aka Sabri al-Banna) to find out if al-Qaeda was present in Iraq. Tam Dalyell claimed these reports, which referred to Abu Nidal's "collusion with both the American and Kuwaiti intelligence apparatuses in co-ordination with Egyptian intelligence", added weight to the theory that Lockerbie was a "tit-for-tat" attack for the shooting down of Iran Air Flight 655 by the USS Vincennes in July 1988, and that the US administration was complicit. Dalyell said the claims that Abu Nidal was working for the Americans would explain some of the mysteries surrounding the Lockerbie disaster for example:

"If the American public had known of a link with Abu Nidal, and had known that the US government knew enough to pull VIPs off the plane and let home-going students take their place, there would have been fury at a time of transition between the presidencies of Ronald Reagan and George Bush Snr. The fact that the Iraqi government either executed Abu Nidal or forced him to commit suicide suggests they had discovered he was an American spy."[7]

The Megrahi I know

On 31 October 2008, the website of The Times carried an opinion piece by Tam Dalyell headed "A civilised, caring man - not a mass murderer" and subtitled "The Megrahi I know":

"My deep conviction, as a 'Professor of Lockerbie studies' over a 20-year period is that neither al-Megrahi nor Libya had any role in the destruction of Pan Am 103.

"I believe they were made a scapegoat in 1990-91 by an American government that had decided to go to war with Iraq and did not want complications with Syria and Iran, which had harboured the real perpetrators of the terrible deed. Libya and its 'operatives', Al-Amin Khalifa Fhimah (al-Megrahi's co-accused) and al-Megrahi, only came into the frame at a very late date. In my informed opinion, al-Megrahi has been the victim of one of the most spectacular (and expensive) miscarriages of justice in history. (...)

"Visiting him in prison, I was struck by his self-possession - a self-possession that had struck many people at his trial, possibly because it never occurred to him that he would be found guilty. It explains my passionate involvement over 20 years, as well as that of Robert Black, Professor Emeritus of Scots law at the University of Edinburgh. It was on our say-so that Libya ever surrendered its citizens to Scottish justice. Whatever happens to al-Megrahi, faced with advanced terminal cancer, the case will continue because on trial is the international reputation of Scottish justice and particularly of the Crown Office...

"Some of us are determined to find the truth and justice that we believe will find him innocent."

On 6 November 2008, The Times printed the following "clarification":

In Tam Dalyell's article in last Saturday's Times "A civilised, caring man - not a mass murderer", Mr Dalyell claimed that the prosecution in the Lockerbie case had lied to Lord Coulsfield, the High Court judge, when it told the trial court at Camp Zeist that it had full confidence in the evidence of the Maltese shopkeeper, Tony Gauci. Mr Dalyell's claim was based on reported comments made by a previous Lord Advocate, Lord Fraser of Carmyllie, that Mr Gauci was an unreliable witness who was "not the full shilling". The present Lord Advocate has asked us to point out that Lord Fraser made it clear in 2005 that he did not have any reservations about any aspect of the prosecution, and had no aspersions to cast on Tony Gauci's evidence and, therefore, that there is no substance to the serious allegation in the article that the Crown had lied to the court about its confidence in the evidence of Tony Gauci.

(Robert Black added: "It should be noted that there is, and could be, no denial that Lord Fraser of Carmyllie used the words attributed to him by Tam Dalyell.")[8]

Following his outspoken opposition to the 2003 invasion of Iraq and criticism of the government, Downing Street suggested that he might face withdrawal of the Labour whip. Dalyell stated in an interview with the American magazine Vanity Fair that Prime Minister Tony Blair was unduly influenced by a "cabal of Jewish advisers." He specifically named Lord Levy who was Blair's official representative in the Middle East and Labour politicians Peter Mandelson (whose father was Jewish) and Jack Straw (whose great-grandfather was Jewish). Mandelson said that "apart from the fact that I am not actually Jewish, I wear my father's parentage with pride."[9] Dalyell denied accusations that the remarks were anti-Semitic.[10][11][12] In March 2003, regarding the 2003 invasion of Iraq, Tam Dalyell accused the then Prime Minister Tony Blair of being a war criminal, stating: "Since Mr Blair is going ahead with his support for a US attack without unambiguous UN authorisation, he should be branded as a war criminal and sent to The Hague."[13]

On 7 March 2003, Dalyell was elected Rector of the University of Edinburgh by the staff and students. He was succeeded in 2006 by Mark Ballard. It was announced on 13 January 2004 that he would stand down at the next election, and he left the House of Commons in April 2005 after 43 years as a member of the Commons. He had been Scotland's longest-serving MP since the resignation of Bruce Millan in 1988. He was succeeded as Father of the House by Alan Williams. On 16 May 2009, the Daily Telegraph reported that Dalyell had claimed £18,000 for three bookcases just months before his retirement from the House of Commons.[14] Dalyell, however, claimed that this was a legitimate expense to which he was entitled;[15] the House of Commons' Fees Office finally released £7,800.

Tam Dalyell married Kathleen Wheatley, a teacher, on 26 December 1963. They have one son, Gordon Wheatley Dalyell, and one daughter, both of whom are lawyers. He is a 6th cousin of Harry S. Truman through the daughter of the 1st Baronet Dalyell of the Binns. In his retirement, and for some years previously, he has contributed obituaries to The Independent. In 2011 he published his autobiography, The Importance of Being Awkward. The dedication is "To the men and women of West Lothian – Labour, SNP, Conservative, Liberal, Communist – who, whatever their political opinions, were kind to me in all sorts of ways over 43 years as their representative in the House of Commons." 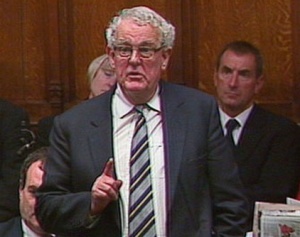 +
Display lifespan
9 August 1932 - 26 January 2017 +
Has almaMater
Eton College +  and King's College (Cambridge) +
Has bilderbergCount
0 +
Has birthPlace
Edinburgh +  and Scotland +
Has cercleCount
0 +
Has deathPlace
West Lothian +  and Scotland +
Has fullPageName
Tam Dalyell +
Has fullPageNamee
Tam_Dalyell +
Has historycommons
http://www.historycommons.org/entity.jsp?entity=tam dalyell 1 +
Has image