The Mountbatten Report purports to be a non-fiction, autobiographical book written by John Ainsworth-Davis. It is a prequel to his best selling Op JB, which describes how he successfully led a mission to rescue Martin Bormann from Berlin at the end of World War II. Two competing editions of this book exist, with different texts and cover stories.

Ainsworth-Davis began the first draft of The Mountbatten Report in 1976, and worked on it until 2006. Unfortunately his original manuscript was destroyed after a mysterious 'flood' in his Hampstead (London) home in early 2008. He believed that the flood was instigated by the British intelligence services which enabled them to destroy his files which were stored on his PC's, and also enabled agents to 'bug' his home, disguised as workmen during in the restoration of his home after the severe flood. But the agents were late, as he had already sent a draft copy to Laurence de Mello in 2006.

British Journalist Laurence de Mello reports that in 2006 John Ainsworth-Davis bypassed his high profile, British literary agent and sent her a draft manuscript, to Buenos Aires. She agreed to co-author it under the pen name 'Ami de Creighton'. He requested that she help him get the manuscript into shape, finish the book and publish it a.s.a.p. offshore and in secret. After de Mello received anonymous threats from the UK, three copies of the draft manuscript were placed in different safety deposit boxes in a Buenos Aires bank vault, while de Creighton continued working on the book. In 2008, a mysterious flood damaged Ainsworth-Davis' London home, destroying all his papers and computers beyond repair. Ainsworth-Davis then went 'off radar' for the next two years, using the draft copies still in Buenos Aires to complete the book.

By 2011 de Mello had found Greg Hallett, whom she believed to be a trustworthy enough editor, and who agreed to help edit and work on the index. He also suggested that he add a small section at the back. He did a "brilliant" job at indexing the book.[1] 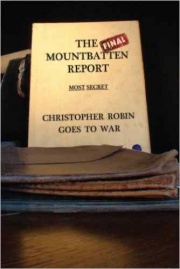 The 2014 "final" version of 'The Mountbatten Report'

The book was published on 14 July 2012[2] (or 2013?) by German publishers 'World of Truth' to which the editor Greg Hallet was a partner. At a London meeting John Ainsworth-Davis and Laurence de Mello discovered that the publisher had made a series of unauthorised changes to the book, including adding the word 'FINAL' in the title. 2000 luxury hardback copies had been printed and delivered from Germany and marketing was ready to go.

Only weeks later in August 2012 John Ainsworth-Davis' literary agent at Curtis Brown Ltd London, threatened to sue Laurence de Mello and intimidated the 87 year old Ainsworth-Davis, stating that they could "not publish anything again" about 'Christopher Creighton' and his WWII operations due to the unconscionable contract forced on John Ainsworth-Davis under duress, in the presence of de Mello at the Curtis Brown offices in September of 2012.[clarification needed]

Laurence de Mello argued that the publication of their book preceded the forced contract and that he could do nothing about it. She believes John Ainsworth-Davis's London literary agent, is an SIS or CIA asset tasked with suppressing information as to Ainsworth-Davis's revelations as regards to Martin Bormann's rescue by British intelligence forces in 1945. This same agent was highly involved[clarification needed] with the OpJB book contract negotiations in 1996/1997 between John Ainsworth-Davis and his publishers, Simon and Schuster.

The indexer/editor made changes to the text without the author's permission and upgraded himself to coauthor, referencing himself as "Lord Chancellor"

Laurence de Mello reports that Greg Hallett and his partners at 'World of Truth' publishing effectively hijacked the book, making unauthorized changes and unlawfully placed it on his own website for sale. The editor, now referring to himself as 'Lord Chancellor', had added himself as co-author while removing John Ainsworth Davis as an author. Moreover he had proceeded to make dire threats and libelous comments against the original co-authors John Ainsworth-Davis and Laurence de Mello.

Ainsworth-Davis wanted to take legal action against Greg Hallett, but de Mello advised him not to, suspecting he had been 'bought' and that this 'provocation' was a deliberate ploy to block, discredit and delay the book's publication, through what could become potentially protracted legal proceedings. Hallett then gave a series of bizarre radio interviews during the marketing period, which did nothing for the book's credibility; while de Mello was closing retail agreements with Waterstones UK, Hallett gave interviews containing bizarre references to himself as The Lord Chancellor (as he had done on the spine of the the book). More distrurbingly, the interviews featured allegations that Lord Louis Mountbatten was a pederast and that Laurence de Mello was a secret agent and thief who, along with John Ainsworth-Davis, was part of a 2011-2013 'Nazi' covert intelligence operation to subject him to mind ops and murder him.[3] 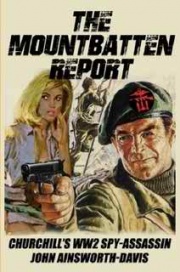 The 2015 version of 'The Mountbatten Report'

On May 29, 2015, de Mello published an alternative version of The Mountbatten Report, which she says is as John Ainsworth-Davis requested. The main(only?)[clarification needed] difference from the 2012/13 ("final") version is the removal of the unauthorised additions. It was published by Goldeneye Publishing Ltd and is available for purchase from Lulu.[4] The index and table of contents are available for preview from Google.[5]