The "quenelle" is a vulgar gesture roughly meaning “up yours”, with one hand placed at the top of the other arm stretched down to signify “how far up” this is to be.[1] Using the name of a French dumpling, French Cameroonian comedian Dieudonné M'bala M'bala started using this gesture in a wholly different context in 2005, as an expression of defiance, incredulity or indifference.

The word quenelle comes from an elongated fish meatballs dish, which is said to look like a suppository.[2] Its originator, Dieudonné described it as "a kind of up yours gesture to the establishment with an in the ass dimension. But it's a quenelle, so it's a bit softer, less violent". The first time Dieudonné used the gesture in a political context was for his 2009 European election campaign poster for the "anti-Zionist party", he stated that his intention was "to put a quenelle into Zionism's butt".[3]

Nicolas Anelka, a striker for the UK football team, West Bromwich Albion, made the gesture at Upton Park after scoring a goal. France's sports minister Valerie Fourneyron branded the sign "disgusting." Anelka said that he gave the gesture as a show of support for Dieudonné, and said the salute was "anti-establishment", rather than anti-Zionist. 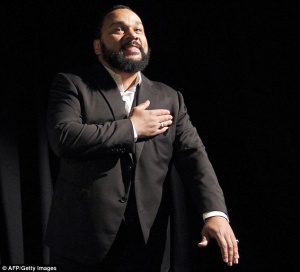