From Wikispooks
(Redirected from Theodore A. Postol)
Jump to navigation Jump to search

Dr Ted Postol is Professor Emeritus of Science, Technology, and National Security Policy at the Massachusetts Institute of Technology and is a former advisor to the US Navy Chief of Naval Operations. He has long been a critic of the effectiveness of the US Patriot missile system.[1]

Dr Ted Postol has also been highly critical of the US narrative of the 2013 Ghouta chemical attack in Syria, arguing in a 46-page report that Al Qaeda rebels were responsible rather than Bashar al-Assad's government.[2]

Similarly Dr Postol produced a 14-page interim report challenging the narrative of a White House Intelligence document issued on 11 April 2017 in relation to an alleged nerve agent attack by the Syrian airforce at Khan Sheikhun in Syria's rebel-controlled Idlib province on 4 April 2017.[4]

"In fact, a main piece of evidence that is cited in the [White House] document points to an attack that was executed by individuals on the ground, not from an aircraft, on the morning of April 4."[5]

On 13 April 2018, RT reported that sources such as the Syrian American Medical Society (SAMS) claiming there had been a chemical weapons attack in the town of Douma are funded by the West.[7]

The two doctors working in the only operational hospital in Douma, questioned by Russians, featured in the fabricated video of the alleged chemical attack on 7 April 2018, testify on video. At minutes 2.00 one of them identifies himself. At min 2.43 the other does so.[8] 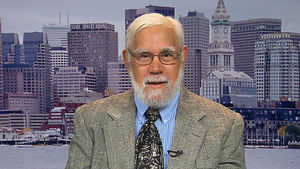 +
Has image2
File:Theodore_Postol.jpg +
Has interest
Physicist +
Has nationality
American +
Has noRatings
0 +
Has objectClass
Person +
Has objectClass2
Person +
Has posting
Professor Emeritus of Science, Technology, and National Security Policy +
Has revisionSize
5,496 +
Has revisionUser
Patrick Haseldine +
Has wikipediaPage
https://en.wikipedia.org/wiki/Theodore Postol +
Has wikipediaPage2
https://en.wikipedia.org/wiki/Theodore_Postol +
Is not stub
true +
Has subobject"Has subobject" is a predefined property representing a container construct and is provided by Semantic MediaWiki.
Theodore Postol +