William Robert (Tosh) Plumlee flew drugs and guns for the CIA. His services as a pilot were also drawn upon in the JFK assassination, although the exact relevance is still unclear.[1]

William Robert (Tosh) Plumlee "found work for the CIA in the 1950s flying weapons to Castro, back when the agency and the beard were still on talking terms."[2] 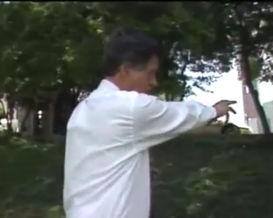 Tosh Plumlee relives his actions of the day of JFK's assassination.[3]

Plumlee claimed that in November, 1963, he was a co-pilot on a top secret flight supported by the CIA to try to stop the JFK Assassination.[4][5]

He testified in 2004 that "When I later learned that Oswald had been arrested as the lone assassin, I remembered having met him on a number of previous occasions which were connected with intelligence training matters."[1]

He also flew various loads of weapons and drugs in the 1980s as part of the cabal's cocaine trafficking, usually paid $5000/flight, in cash. In an interview with FOX News, he stated that "The United States government played both ends against the middle. We were running guns. We were running drugs. We were using the drug money to finance the gun running operation."[4][2]

Plumlee made at least 3 flights landing unmarked C-130 cargo carriers painted dark green late at night at military installations. He estimated in 2013 that he had trafficked up to 30 tonnes of cocaine from Medellín and Bogotá, Colombia out of Potrero Grande.[6] He states that he never learned the identity of the men who unloaded his planes, but noted that they were dressed just as he was, in civilian attire, and had long hair. Plumlee says he guesses they could have easily passed for drug dealers. But was pretty sure that they were not military, but assumed that they were CIA, as he was.[7]

In 1999, Tosh Plumlee gave 5 hours of interviews to Michael Levine, which were later placed on the internet.[8]

In his old age, Plumlee has been more willing than most to share his life story, and has given interviews to various interested parties.[6][7][9]

As of 2017, YouTube had many interviews of Tosh Plumlee. However, his Wikipedia page was deleted on 8 June 2007, reportedly because "Author Requests Deletion".[10]