Tristan Garel-Jones (born 28 February 1941) is a British Conservative Party politician who served as the Member of Parliament (MP) for Watford from 1979–97, before being made a life peer as Baron Garel-Jones of Watford in 1997.

Following his election to Parliament, Garel-Jones served as a whip and also as a junior minister at the Foreign and Commonwealth Office.[1]

Born in Wales in February 1941, when his father was posted to India, Tristan Garel-Jones lived above his uncle's newsagent shop in Llangennech, near Llanelli, went to the village school and chapel and spoke only Welsh until his family moved to London after the war. His father started the language school in Madrid, where Garel-Jones taught for 10 years after leaving The King's School, Canterbury.

He married Catalina Garrigues, the daughter of a wealthy landowner in the south of Spain, and later became a merchant banker and a name at Lloyd's - an investment that led to losses of pounds 700,000.[2]

Garel-Jones first contested the Welsh constituency of Caernarvon in February 1974, but was defeated by Dafydd Wigley the future leader of Plaid Cymru. He was elected for Watford at the 1979 General Election.

Viewed as an effective whip who successfully delivered parliamentary votes in favour of Thatcher's legislation, Garel-Jones was nonetheless seen as a mixture of Machiavelli and Ivan the Terrible by the Thatcherite right-wing.[3]

Garel-Jones was a leading pro-European and remained so despite the Conservative party moving to a more eurosceptic position by the end of the Thatcher era. This created suspicion among right-wing Thatcherites who thought of him as one of the "wets". However, he voted for Margaret Thatcher in the first round of the Conservative Party leadership challenge by Michael Heseltine, but reserved the right to vote against her if it went to a second round. He subsequently voted for Douglas Hurd.

Garel-Jones says with a clear conscience that he did not want the promotion to the Foreign Office from the whips office. In his exchange of letters with Prime Minister John Major he writes: "During the summer holidays in 1991 I asked you if, after the general election, I might be allowed to return to the back benches."

During the same year, Garel-Jones, a fluent Spanish speaker, interpreted for Major during his visit to South America for the Earth Summit in Rio.

After he stepped down from the House of Commons in 1997, he was given a life peerage as Baron Garel-Jones of Watford in the County of Hertfordshire.[5]

Garel-Jones is a supporter of the British Humanist Association, and a vice chairman of the All-Party Parliamentary Humanist Group.

Tristan Garel-Jones is said to be the inspiration for the fictional Whip turned PM, Francis Urquhart in the House of Cards TV series.[6]

Garel-Jones was portrayed by the actor Hugh Fraser in the 2004 BBC production of The Alan Clark Diaries[7] and by Guy Henry in the 2009 television film Margaret.[8] 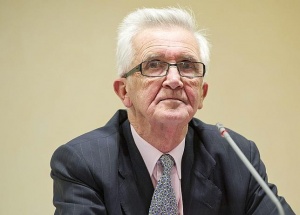