From Wikispooks
< UN
Jump to navigation Jump to search

The United Nations Disengagement Observer Force (UNDOF) was deployed in June 1974 in the Golan Heights district of Syria to monitor the ceasefire between Israel and Syria following the 1973 Yom Kippur War. Without an Israel-Syria peace agreement in the intervening four decades, UNDOF - whose mandate is renewed by the UN Security Council every six months - remains in the Golan Heights.[1]

On 19 April 2019, Major-General Francis Sanziri died suddenly in Israel at the age of 62. The Ghanaian national had served as the head of UNDOF since October 2017.[2]

On 6 October 1973, war erupted in the Middle East between Egyptian and Israeli forces in the Suez Canal area and the Sinai, and between Israeli and Syrian forces in the Golan Heights where, from March 1974, the situation became increasingly unstable. Against this background, the United States undertook a diplomatic initiative, which resulted in the conclusion of an Agreement on Disengagement between Israeli and Syrian forces. The Agreement provided for an area of separation and for two equal zones of limited forces and armaments on both sides of the area, and called for the establishment of a United Nations observer force to supervise its implementation. The Agreement was signed on 31 May 1974 and, on the same day, the Security Council adopted resolution 350 (1974) by which it set up the United Nations Disengagement Observer Force (UNDOF).

All quiet on the Golan 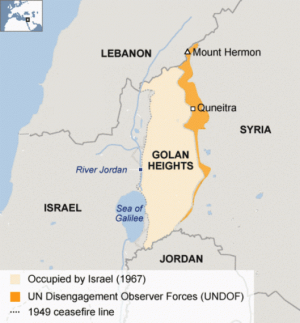 In the following years, the situation in the Israel-Syria sector remained generally quiet and both parties cooperated fully with the mission. In order to carry out its mandate, UNDOF maintained an area of separation, which is over 75 kilometres (46.6 miles) long and varies in width between approximately 10 kilometres (6.21 miles) in the centre to 200 metres (0.12 miles) in the extreme south. The terrain is hilly and is dominated in the north by Mount Hermon, which is the location of the highest permanently manned United Nations position at an altitude of 2,814 metres (1,75 miles). The area of separation is inhabited. According to the 1974 Disengagement of Forces Agreement, it is to be governed and policed by the Syrian authorities. No military forces other than UNDOF are permitted within it.

UNDOF was entirely deployed within and close to the area of separation, with two base camps, 20 permanently manned positions, eight outposts manned during daylight hours and eleven observation posts. With the assistance of the military observers from UNTSO's Observer Group Golan, UNDOF actively patrolled the area of separation by day and night. From its numerous positions and through patrolling, the Force supervised the area of separation and intervened whenever any military personnel enter or try to operate therein. This was accomplished using permanently manned positions and observation posts, foot and mobile patrols operating at irregular intervals by day and night, and closes contact and liaison with the host nations.

UNDOF was also actively engaged in mine clearance activities and related public awareness programmes, and assisted the International Committee of the Red Cross (ICRC) in facilitating the passage of mail, goods, and persons through the area of separation during special crossing events. Within the integral medical resources of UNDOF, medical treatment was provided to the local population on request.

In March and May of 2013, an armed anti-regime Syrian opposition group called the Yarmouk Martyrs Brigade abducted a total of 25 peacekeepers in the Golan, although they were released after a few days. The abductions took place after days of militant activity inside of the disengagement zone. On 27 August 2013, the al Qaeda-aligned jihadist group Jabhat al-Nusra reportedly took control of Quneitra, an abandoned city between Israeli and Syrian positions in the Golan. A considerable escalation of the conflict in Syria in 2013 has thus affected the UNDOF area of operations significantly. The military operations carried out by the Syrian Arab armed forces and the armed members of the opposition in the area of separation have adversely affected the efforts of the Force to effectively carry out the mandated tasks. They have also significantly raised the potential of escalating tensions between Israel and Syria and jeopardising the decades-long ceasefire between the two countries and the stability of the whole region. There has also been a rise in the nature, number and gravity of incidents involving United Nations personnel on the ground, including abductions of UNDOF and UNTSO observers, the direct and indirect firing at them by the Syrian Arab armed forces or armed members of the opposition, the theft of UN weapons and ammunition, vehicles and other assets, and the looting and destruction of facilities.

According to the December 2015 monthly forecast, due to the spillover of the Syrian civil war into UNDOF’s area of operations, the majority of UNDOF peacekeepers relocated from the Bravo (Syrian) side to the Alpha (Israeli) side of the ceasefire line in September 2014. The UNDOF command moved its headquarters to Damascus and some peacekeepers remain on the Syrian side at Mount Hermon that is strategically important to Israel, which could feel compelled to man the position itself if there were no UNDOF security presence there. This would be an especially difficult challenge to regional security and the 1974 disengagement agreement.

The civil war in Syria continues to adversely affect UNDOF’s ability to function, and increases the possibility of escalating tensions not only between Israel and Syria but also between Israel and Lebanon due to the overt presence in the Golan of Hezbollah, the Tehran-backed Lebanese militia fighting on the side of the Syrian regime.

The September UNDOF report detailed a 20 August 2015 rocket attack from Syria into the Israeli-occupied Golan Heights. Israeli airstrikes then targeted Syrian regime forces, which Israel considers responsible for attacks launched from Syrian territory. The next day, Israel continued the airstrikes, claiming to target Tehran-backed Palestinian militants of Islamic Jihad, which denied involvement. In the months since, most incidents have been minor and limited to errant rocket fire from the Syrian side, with Israel returning fire.

In October 2018, after being closed for nearly four years, the Quneitra crossing in Syrian’s Golan Heights was reopened, signalling the completion of logistical and security preparations at Syria’s key border crossings, including the recent announcement by Jordanian and Syrian officials to reopen their crossing at Nassib. This signals a boost for Damascus, as the Syrian flag was raised at the Quneitra crossing, witnessed by a detachment of UNDOF observers and prominent members of Druze community, the predominant population in the area.[3]

Russia commenced airstrikes in Syria in support of President Bashar al-Assad on 30 September 2015. However, as early as 21 September 2015, Israel and Russia held “de-confliction” talks in Moscow to avoid clashes of their respective forces operating in Syrian airspace.

The December Secretary-General’s report is expected to highlight that Syrian forces have recaptured some positions from armed opposition groups in the Golan, resulting in a somewhat calmer situation in the central and northern areas of UNDOF’s area of operations. However, clashes between government forces and armed opposition groups have increased in the southern part of the mission’s area of operations, including an intensification of airstrikes. In late October, media reports indicate that Russian airstrikes targeted rebel positions in the southern province of Dera’a, near the Golan Heights.

US will not recognise Israeli sovereignty

On 25 March 2019, President Donald Trump signed a proclamation recognising Israel’s sovereignty over the Golan Heights, and was applauded by Israel’s Prime Minister Benjamin Netanyahu during a ceremony in the Diplomatic Reception Room at the White House.[5] The unprecedented move caused an international backlash from Arab states and UN Security Council member states. The EU, France, and the UK stated that they maintained their statements on the illegality of Israel’s 1981 annexation.[6]