Originally a department of the US Treasury, the Secret Service was originally formed to suppress counterfeit currency, though its mission has gradually evolved over the years. Their first mission to protect a US President was President Cleveland in 1894[1]

The dual mission of the United States Secret Service is "to safeguard the nation's financial infrastructure and payment systems to preserve the integrity of the economy, and to protect national leaders, visiting heads of state and government, designated sites and National Special Security Events".[2]

There is considerable evidence of an organised Secret Service stand down for the JFK Assassination. At that time it was under the directorship of James Joseph Rowley, who was subject to no disciplinary action and allowed to stay in office for another decade. 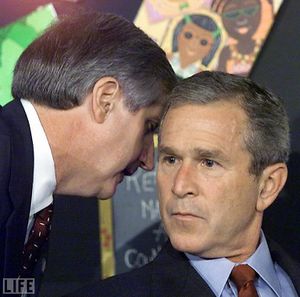 A handler informs George Bush that a second plane had crashed into the World Trade Center and that America is under attack. He continues the reading lesson with the children.[3][4]

On September 11th, 2001, the secret service notified US President George W. Bush, that a plane had crashed into a tower of the World Trade Center in New York. When he showed no interest in this fact, they left him where he was, suggesting that they did not perceive the events of that day as a threat. Bush was hustled out of the primary school classroom only after the second plane had crashed into a WTC tower.

The New York City Field office occupied floors 9 & 10 of 7 World Trade Center.[5] After the USA Patriot Act was signed into law by George W. Bush, which mandated the U.S. Secret Service to establish a nationwide network of Electronic Crimes Task Forces (ECTFs) to investigate and prevent attacks on financial and critical infrastructures in the United States.

Since 2002, the Secret Service has been part of the Department of Homeland Security, which agents say has resulted in the bureaucratic infighting, political meddling and inefficiency that characterizes DHS. Bryson Hull wites that "the Secret Service has needed real changes for more than a half-century. It rewarded one director who oversaw the ultimate failure of the agency’s mission: protecting the president’s life. And it has sent others who oversaw egregious episodes of ineptitude into comfortable retirements."[6]