The University of Deusto first opened in 1886, having been founded because of the Basque Country's desire to have its own university and the Society of Jesus's wish to move its School of Higher Studies in Laguardia to a more central place. The Universidad Comercial (Business College), founded in 1916, was the first business school in Spain, and the only one for nearly 50 years.[1]

The advent of the Second Spanish Republic (1931) interrupted and altered university life at Deusto. On 23 January 1932, the Spanish Government dissolved the Company of Jesus by decree, and the University, owned by the Jesuits, was closed down. Some lectures still continued at the "Academia Vizcaína de Cultura", and the "Universidad Comercial" (Faculty of Economics) could carry on work as normal until the beginning of the Spanish Civil War. During the war, the University of Deusto became a military base, but after the fall of Bilbao in 1937 it was turned into a hospital, food supply centre, and concentration camp. It resumed classes in October 1940. 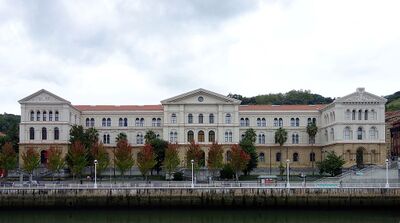 Main building of the University of Deusto, Bilbao

In 1962 the University was very well known throughout Basque country and all of Spain, and its former students excelled in the worlds of business, politics, and culture. However, they had a drawback: their studies were not officially recognized by the State and they had to sit an examination at a State University. Society did not really take this circumstance into account, but action was taken so that official recognition was granted. On 5 April 1962, an agreement was signed between the Spanish Government and the Holy See that provided Catholic or Church Universities with a legal basis. On 10 August 1963, the University of Deusto received canonical approval by the Holy See. In September of that year it was recognized by the State, including its Faculties of Law and Philosophy and Arts (Modern Philology division). Since then, the number of students and centres has been increasing rapidly, first from 500 to 1,000 students, and to 2,700 five years later; ten years later there were 5,000 and at present it has reached 14,000 students. [2]