The University of Pisa, officially founded in 1343,[1] is one of the oldest and most prestigious universities both in Italy and in Europe. 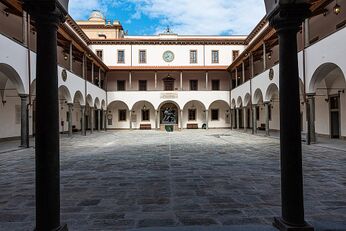 The University of Pisa was officially founded in 1343, although various scholars place its origins in the 11th century. It is certain, however, that from the middle of the 12th century Pisa had a “Universitas” in the original sense of the word, that is, a group of students who gathered around masters. It was during this period that Leonardo Fibonacci was born and worked. He was one of the greatest mathematicians in history who, through his work, synthesized the spirit and processes of Greek geometry and the tools of Arabic mathematics for the first time in Europe.

The papal seal “In Supremae dignitatis”, issued by Pope Clement VI on 3 September 1343, granted the Studium in Pisa the title of Studium Generale with various exclusive privileges, making it universally recognised. In medieval times, the Studium Generale was a higher institute of education founded or confirmed by a universal authority, namely the papacy or the empire. Pisa was among the first European cities to vaunt a papal attestation, followed by Prague in 1347 and Heidelberg in 1386. At the outset in Pisa, lessons in Theology, Civil Law, Canon Law and Medicine were established.

The first years of the new Studium were particularly difficult, although there is documentary evidence that shows persistent academic activity with a slow recovery starting in 1355.

The end of the 14th century and the beginning of the 15th century saw Pisa and its Studium heading towards a slow death. The war, which had allowed the Florentines to conquer the city, was so socially and economically damaging that it made preserving even the most essential academic activity impossible.

The Medicis and Galileo 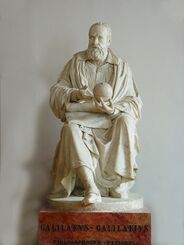 During the first few days of November 1473, the Studium in Pisa began to develop systematically at the request of Lorenzo dei Medici. In 1486, the construction of a building specifically for lessons was commissioned: the building, the future Palazzo della Sapienza, still the centre of the present-day University, was placed in the 13th century Piazza del Grano, which could be reached through the gateway dell’Abbondanza. The image of the Cherub was placed above this gateway. In the Christian tradition, the Cherub represents an angelic being with a clearer vision of God, who in turn represents absolute knowledge. Since then, the Cherub has become the iconographic symbol of the University of Pisa and, in more recent times, the Order of the Cherub is awarded to members of the University teaching staff who have contributed to enhancing its prestige.

In 1497, the Pisan institute suffered a new period of decline and was moved to Florence for nine years. The rise to the throne of Duke Cosimo I dei Medici marked the beginning of a new era. The formal reopening of the University on 1 November 1543 was, in fact, considered to be a second founding. With the 1545 Statute, Cosimo managed to raise the quality of the teaching, making the University of Pisa one of the most important in Europe for both teaching and research. The Duke established the Chair of Simples (Semplici in Botany) and appointed Luca Ghini: between 1543 and 1544 the Garden of Simples was founded. This was the first botanical garden in the world annexed to a university Studium. A few decades later, the garden was moved to its present position a few dozen metres from Piazza dei Miracoli, covering an area of around three hectares with 6,000 cultivated plants and seeds exchanged with other 400 structures in the world. Ghini was succeeded by the philosopher and scientist Andrea Cesalpino, who created the first scientific method for the classification of plants and can be considered the forerunner of the discovery of the cardiovascular system.

Cosimo I was still ruling when Galileo Galilei was born on 15 February 1564 in Pisa. Galileo Galilei is universally thought of as the founder of modern science and the modern experimental method. He was initially a student and then a teacher of Mathematics at the University of Pisa before moving to Padova. It was in the city in Tuscany that he began the studies and experiments which were the basis of his revolutionary theories.

The house of Lorraine

The decline of the Grand Duchy of Tuscany (Medici), in the middle of the 18th century, saw the downfall of the Studium in Pisa, which only picked up again with the Lorraine dynasty. It was thanks to these enlightened innovators and reformers that numerous works and the establishment of the new Chairs of Experimental Physics and Chemistry were created.

The annexation of Tuscany to the Napoleonic Empire at the beginning of the 19th century brought about the transformation of the Studium into an imperial Academy: the University became a subsidiary of the University of Paris, even though it managed to retain a certain degree of autonomy. At that time, five faculties (Theology, Law, Medicine, Science and Arts), exams, different academic qualifications (bachelor, master and doctoral degrees) and degree theses came into being. The Scuola Normale Superiore was established between 1810 and 1813. It started out as a subsidiary of the École Normale in Paris and closed immediately to be reopened in 1846 with the inauguration of its present seat at Palazzo della Carovana in Piazza dei Cavalieri.

The period of the Restoration led to a reconsideration of the organisation within the Studium, but not to the complete revocation of the Napoleonic experience. In 1826, lessons on Egyptology were introduced at the University of Pisa. This was a first in Europe and the world in general, leading to the renowned French-Tuscan expedition to Egypt between 1828 and 1829. In 1839, Pisa hosted the first congress of Italian scientists, which saw the participation of over 400 scholars and 300 experts in the various branches of knowledge from different states of the peninsula. It was during this period that the University was at the centre of the reform called for by Provveditore Gaetano Giorgini, which saw the faculties increase in number to six (Theology, Law, Arts, Medicine, Mathematics and Natural Sciences) and for the first time in the world, the Chair of Agriculture and sheep-farming was created and entrusted to Cosimo Ridolfi.

In the University and in the city, liberal and patriotic ideals were coming to the fore and these reached their peak when teachers and students formed a university battalion and joined the battle of Curtatone and Montanara in 1848. This was one of the most significant battles in the Italian Risorgimento. A memorial plaque in Palazzo della Sapienza commemorates the volunteers who “died fighting for the rebirth of Italy”, while the Italian flag used by the university battalion was honoured with the gold military medal by the Italian Republic in 1948.

The kingdom of Italy

With the creation of the Kingdom of Italy, the University of Pisa, which now counted around 560 matriculated students, re-emerged with all the faculties then present in the regulations and was acknowledged through the university reform of 1862, as one of the six principal national universities together with Turin, Pavia, Bologna, Naples and Palermo. The consolidation and expansion of the University, above all in the years straddling the 1800s and the 1900s, had a direct impact on the urban fabric development of the city even though the number of students increased only moderately (891 in 1912). The University gradually welcomed female students and in 1877, Ernestina Paper graduated in Medicine. She was the first woman to graduate from an Italian university and was followed by Cornelia Fabri in Mathematics and Erminia Pittaluga in Arts.

The reform called for by the minister Giovanni Gentile in 1923, further confirmed the University’s prominent position at national level when it was placed among the ten universities totally funded by the state. Notwithstanding the aim to make Pisa a great “centre of university fascist culture” antifascist unrest was still alive, both in the academic community and among students. The application of racial laws, the first of which were signed by King Vittorio Emanuele III in 1938 at San Rossore, near Pisa, affected foreign and Italian students and university teachers severely, as was the case throughout Italy. It was not until 2018, in Pisa, 80 years after the signature, that there was an official and public admission of responsibility on behalf of the Italian universities (on the University of Pisa’s own initiative). 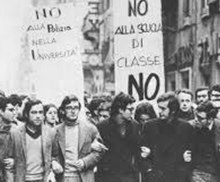 The university was a center for the student movement of 1968

The physical and moral destruction caused by the Second World War was soon overcome and the University of Pisa, whose matriculated students passed from 768 in 1945 to 1,292 in 1950, was able to lead the field in many areas of knowledge, adapting to the new demands of social, civil and economic life. The faculties of Economics and Business Studies (1948), and later Foreign Languages and Literature (1969) and Political Science (1970) joined the faculties present before the conflict - Engineering and Pharmacy - and accompanied the arrival of the university for the masses (between 1961 and 1972 student numbers in Pisa went from around 9,000 to 27,000). At the start of the sixties, the University of Pisa established the first Italian Chair of Film History and Criticism. In 1969, the degree course in Computer Science (Informatics) was set up. It was the first in Italy and followed the creation of the Pisan Electronic Calculator (CEP), designed in the mid-1950s and sponsored by Nobel Prize winner and graduate of the University of Pisa, Enrico Fermi, which was the basis for other firsts in Italy in its field. In 1986, for example, the first Italian link to the Internet originated in Pisa.

In 1967, the merger of the pre-existing colleges led to the creation of the Sant’Anna School of Advanced Studies and the Scuola Normale Superiore, forming a system of further education which is of the highest prestige at international level.

Also in 1967, during a period of protests, the “Tesi della Sapienza”, one of the milestones of the 1968 student movement in Italy, were compiled in Pisa. This phase of the unrest was particularly animated in the city with some dramatic moments.

From the end of the 1970s, the University’s Natural History Museum moved to the enchanting 14th century Charterhouse of Calci, a building of priceless historic and architectural worth. The museum houses numerous rooms dedicated to zoology, minerology and palaeontology as well as Italy’s largest freshwater aquarium and Whale gallery with more than thirty whale skeletons exhibited in an ancient portico.

The Ruberti reform of 1989, which envisaged the statutory autonomy of universities, forced the University to approve a new Statute, whose overall structure was only called into question with the so-called “Gelmini reform” in 2010. This led to the adoption of the 2012 Statute and the organizational layout which excluded the 11 Faculties in favour of 20 Departments.

At present, the University is divided into 20 Departments, with around 150 first and second level degree courses, and single cycle degree courses, more than 20 doctoral courses, 50 schools of specialisation and more than 60 postgraduate courses. There are more than 1,500 members of teaching staff and a slightly higher number of administrative personnel, technicians, foreign language assistants and librarians. There are around 50,000 students enrolled, and in a city with a population of approximately 90,000 inhabitants, this makes Pisa a true city campus. The students come mainly from Tuscany and Liguria, with a significant intake from many other regions, above all from the south of Italy. A sizeable number of the students are also foreign.

Among the many graduates of the University of Pisa are the Nobel Prize winners Giosuè Carducci, Enrico Fermi and Carlo Rubbia, holders of the Field Medal for Mathematics, Enrico Bombieri and Alessio Figalli, Presidents of the Republic, Giovanni Gronchi and Carlo Azeglio Ciampi, film directors Mario Monicelli and Paolo and Vittorio Taviani and writers Tiziano Terzani and Antonio Tabucchi. Pisa’s most famous graduate in the world today is the tenor Andrea Bocelli.

This page imported content from Wikipedia on 03.03.2021.
Wikipedia is not affiliated with Wikispooks.   Original page source here
Retrieved from "https://wikispooks.com/w/index.php?title=University_of_Pisa&oldid=239709"
Category: