The University of Wrocław (Uniwersytet Wrocławski) is a public research university located in Wrocław, Poland. It is the largest institution of higher learning in the Lower Silesian Voivodeship with over 100,000 graduates since 1945, including some 1,900 researchers among whom many received the highest awards for their contribution to the development of scientific scholarship. Renowned for its relatively high quality of teaching, it was placed 44th on the QS University Rankings: EECA 2016,[1] and is situated in the same campus as the former University of Breslau, which produced 9 Nobel Prize winners.[2][3]

It was founded in 1945, replacing the previous German University of Breslau. Following the territorial changes of Poland's borders, academics primarily from the Jan Kazimierz University of Lwów (now Lviv) restored the university building heavily damaged and split as a result of the 1945 Battle of Breslau. 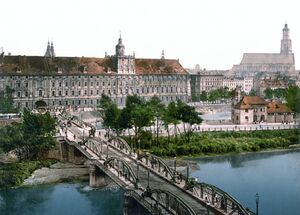 The University of Breslau, 19th century

After the defeat of Prussia by Napoleon and the subsequent reorganisation of the Prussian state, the academy was merged on August 3, 1811, with the Protestant Viadrina University, previously located in Frankfurt (Oder), and re-established in Breslau as the Königliche Universität zu Breslau – Universitas litterarum Vratislaviensis (in 1911 named the Schlesische Friedrich-Wilhelms-Universität zu Breslau, to honour the founder Frederick William III of Prussia). At first, the conjoint academy had five faculties: philosophy, medicine, law, Protestant theology, and Catholic theology.[citation needed]

In the late 19th century, numerous internationally renowned and historically notable scholars lectured at the University of Breslau, Peter Gustav Lejeune Dirichlet, Ferdinand Cohn, and Gustav Kirchhoff among them. In 1817, Poles made up around 16% of the student body.[4][5] At the end of the 19th century around 10% of the students were Polish and 16% were Jewish.[6] This situation reflected the multi ethnic and international character of the University.[7] Both minorities, as well as the German students, established their own student organisations, called Burschenschaften. Polish student organisations included Concordia, Polonia, and a branch of the Sokol association. Many of the students came from other areas of partitioned Poland. The Jewish students unions were the Viadrina (founded 1886) and the Student Union (1899). Teutonia, a German Burschenschaft founded in 1817, was actually one of the oldest student fraternities in Germany, founded only two years after the Urburschenschaft. The Polish fraternities were all eventually disbanded by the German professor Felix Dahn, and in 1913 Prussian authorities established a numerus clausus law that limited the number of Jews from non-German Eastern Europe (so called Ostjuden) that could study in Germany to at most 900. The University of Breslau was allowed to take 100.[8] As Germany turned to Nazism, the university became influenced by Nazi ideology. Polish students were beaten by NSDAP members just for speaking Polish.[9] In 1939, all Polish students were expelled and an official university declaration stated, "We are deeply convinced that [another] Polish foot will never cross the threshold of this German university".[10] In that same year, German scholars from the university worked on a scholarly thesis of historical justification for a "plan of mass deportation in Eastern territories"; among the people involved was Walter Kuhn, a specialist of Ostforschung. Other projects during World War II involved creating evidence to justify German annexation of Polish territories, and presenting Kraków and Lublin as German cities. 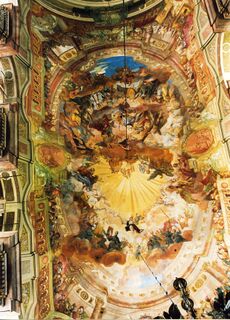 After the Siege of Breslau, the Soviet Red Army took the city in May 1945. Breslau, now known as Wrocław, became part of the Republic of Poland. The first Polish team of academics arrived in Wrocław in late May 1945 and took custody of the university buildings, which were 70% destroyed. Parts of the collection of the university library were lost during the Red Army's advance in 1945,[11] burned by soldiers on 10 May 1945, four days after the German garrison surrendered the city.

Very quickly some buildings were repaired, and a cadre of professors was built up, many coming from prewar Polish Jan Kazimierz University of Lwów and Stefan Batory University of Wilno.[12] Following postwar border shifts, thousands of former employees of the Lwów Library, the Jan Kazimierz University and the Ossolineum Institute moved to the city.[13] In mid-1948, over 60% of professors at the Wrocław University and Polytechnic were from Kresy, with scholars from prewar Lwów being particularly prominent. Stanisław Kulczyński from the University of Lwów became the first president of the two Polish universities in Wrocław, while Edward Sucharda from the Lwów Polytechnic was the vice-president.[14]

The University of Wrocław was refounded as a Polish state university by the decree of the State National Council issued on 24 August 1945. The first lecture was given on 15 November 1945, by Ludwik Hirszfeld. Between 1952 and 1989 the university was named Bolesław Bierut University of Wrocław (Polish: Uniwersytet Wrocławski im. Bolesława Bieruta) after Bolesław Bierut, President of the Republic of Poland (1947–52).