Vanessa Beeley is a British investigative journalist focused on the Middle East. On her return from Syria in September 2016, she reported how 600,000 people moved from East to West Aleppo to take refuge when the NATO-backed rebels attacked the city in 2012.[1]

Vanessa Beeley is clear that Syria's White Helmets, lauded in the West as a group of volunteer first-responders, funded by the US, Britain and others to the tune of $100 million and nominated for the 2016 Nobel Peace Prize, are nothing but terrorists. She accuses the White Helmets of stealing ambulances and fire engines, and even killing Syria's real Civil Defence officials.[2] [3][4]

On 25 July 2018, Vanessa Beeley was interviewed on 21st Century Wire's "Taylor Report" about a large number of White Helmets exiting Syria via the Golan Heights with the assistance of Israel.[5]

Vanessa Beeley's brief summary of the military campaign in East Ghouta "for those who are asking what is happening":

Let me ask you a question.

I am not sure which town you live in but imagine the suburbs of that town are occupied by a number of internationally recognised militant/terrorist factions intent on ethnically cleansing your town of any religious minority that does not ideologically comply with their extremism – and then imagine if, every day, those same factions are firing mortars, explosive bullets into crowds of school children or civilians at the busiest times in your town, or sending suicide car bombs to further maim and mutilate civilians – would you ask your government to do nothing and allow your city to be gradually destroyed and its people massacred over time?

Or, would you demand that your government send its Army into those areas to liberate them from the militant factions?

That is what is happening but only after the Syrian government has spent months/years trying to negotiate with those militant factions and has been evacuating a huge number of civilans from those areas prior to commencing the military campaign. Those militant factions are also holding civilians as hostages, human shields, they are starving them, torturing and abusing them, oh and putting them in cages.

This is war which is never desirable but who has imposed this war upon Syria? The NATO member states supported by Saudi Arabia, Israel, the UN and the aligned commercially-controlled media who are currently running a protectionist campaign for the "rebels" who are financed and armed by the governments who control the media.

Hope that is now clear?

Long live Syria and the Syrian Arab Army, may their victory be swift and the liberation complete...then you will hear the truth from the Syrian civilians not from the NATO member state mouthpieces in western media.

Children of West Aleppo targeted, murdered and injured by today's horrific rain of hell cannon mortars from terrorist factions in East Aleppo, armed and equipped by the US, UK, Turkey, Gulf States and Israel.

The majority of those killed and injured are Syrian Christians of Armenian origin:

The martyrs of today from the bombing of the neighbourhoods of Midan and Vilat:

The following is from the transcript of an RT video broadcast on 15th December 2016. It is an exchange between Vanessa Beeley and Brent Budowsky, a US-based reporter for The Hill, concerning the liberation of Eastern Aleppo from its 4 year occupation by Al-Nusra Front and their affiated rebel factions. It is illustrative of the gross bias of western media reporting on Syria generally and the ignorance of one of its 'journalists' in particular:

RT: Why so much hysteria in the media? Why is no one talking about defeating terrorists - who are Al-Nusra, the Al-Qaeda affiliate in Syria?

Brent Budowsky, columnist for the Hill: Nobody wants to kill and defeat the terrorists more than I do and more than the US, but what is happening in Aleppo is a moral crime against humanity. I agree with what Secretary of State John Kerry said that the Russian government should do everything to stop it, to end it, to support a ceasefire, to end the carnage, the killing and the bombing of innocent civilians. The UN is concerned about it. And I agree with their investigation into possible war crimes. I agree with what the pictures tell us. The bombing of civilians and the massacre of the innocents must stop. My strong advice to President Putin would be to follow John Kerry’s advice and end that carnage and killing right now. So should Assad, so should the Syrian army. It is a joke to treat them as liberators; they are mass-murdering civilians…

RT: Vanessa, what is your reaction to this political view of the events? As a journalist, how do you feel about that?

Vanessa Beeley, journalist: I’ve just returned from three days in East Aleppo, and I would like to 100 percent correct the lies that are being disseminated by the media, think tanks, governments across the West. Particularly your guest who has just uttered complete lies. I’ve spent basically three days in all the various liberated areas of East Aleppo… Many of the testimonies that we received from the civilians that this gentleman has just accused Russia and Syria of bombing, actually told us that they had been incarcerated for the last four years by the various US-backed terrorist militant groups such as Al-Nusra Front, Ahrar al-Sham, Harakat Nour al-Din al-Zenki whom we know beheaded the 12-year old Palestinian child. We were told stories about civilians who were trying to leave this imprisonment when the Russian and Syrian governments opened the humanitarian corridors. I interviewed one lady, I have her on film, where she tells me that one woman, who had been kept in a condition of starvation and malnutrition by these militant factions – who were stockpiling any humanitarian aid that came in and either selling it at extortionate prices. When this lady went on her knees to beg for food, she was shot in the mouth by the militant factions that have been imprisoning these civilians for the last four and a half years. Your [American] media and propaganda have supported that incarceration, torture, abuse and absolute horror that these civilians had had to go through.

RT: The spokesperson of the US State Department said he hasn't seen the videos of people celebrating on Aleppo’s streets. He's in a senior position; he must know what he's talking about, doesn't he?

Brent Budowsky: We can witness day by day dead babies by dead babies. You can watch the CNN, the BBC, any other television station. The point is – the killing, the bombings of civilians must stop. The dead children and babies is a moral outrage against humanity.

Vanessa Beeley: Can I ask one question? Where are these sources being able to transmit this information from? Because in East Aleppo there is no 3G, there is no wi-fi, there is no electricity. So I’d like to know how these sources are able to get this information via Skype connection to organisations – I’ll use that term loosely – like CNN, BBC, Channel 4. I would very much like to know how they achieve it and how there’re able to do that in East Aleppo. Unlike the corporate mainstream media, I have been in East Aleppo for the last three days, therefore, I’m giving you eyewitness testimony unlike your mainstream media that has not been there and relies upon spurious activists – like the White Helmets, who are funded by every single nation that has a vested and declared interest in regime change in Syria. That is your reliable source. Or perhaps the ‘Aleppo Media Center’ – French Foreign Office funded.... [8]

A Document by Vanessa Beeley 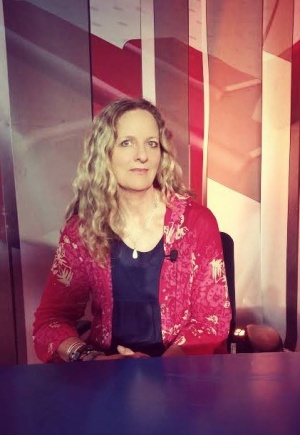 +
Has image2
File:Vanessa_Beeley.jpg +
Has interest
Middle East +, Syria +, White Helmets +  and Peace +
Has keywiki
http://www.keywiki.org/Vanessa Beeley +
Has linkedin
https://www.linkedin.com/in/vanessa-beeley-a1ab6740 +
Has nationality
British +
Has noRatings
0 +
Has objectClass
Person +
Has objectClass2
Person +
Has revisionSize
10,642 +
Has revisionUser
Patrick Haseldine +
Has sourcewatch
http://www.sourcewatch.org/index.php/Vanessa Beeley +
Has twitter
https://twitter.com/VanessaBeeley +
Is not stub
true +