From Wikispooks
(Redirected from Venezuelan)
Jump to navigation Jump to search

Venezuela, officially the Bolivarian Republic of Venezuela,[1] is a country on the northern coast of South America, consisting of a continental landmass and a large number of small islands and islets in the Caribbean Sea. The capital and largest urban agglomeration is the city of Caracas. It has a territorial extension of 916,445 km2 (353,841 sq mi). The continental territory is bordered on the north by the Caribbean Sea and the Atlantic Ocean, on the west by Colombia, Brazil on the south, Trinidad and Tobago to the north-east and on the east by Guyana.[2]

In March 2015 the administration of Barack Obama, at the urging of US oil corporations, declared Venezuela to be a “threat to the national security” of the US.[4]

In 2002, a foreign-backed attempted coup failed to depose Hugo Chavez after a mass display of popular support.

In the context of the failed coup in Equatorial Guinea in 2004, former British PM Margaret Thatcher was said to have asked whether Simon Mann had yet met a group, led by a man called "Sanchos", who were seeking to remove Hugo Chávez from Venezuela. Mann wrote:

"No – I hadn't: but, Mark says, we are seeing him next day, in Eaton Place, just next door." He continues with Mrs Thatcher's reply: "'Good. Well, I hope that goes well too.' She looked at me with her imperial gaze. 'We must always look after our friends, Simon … as I'm sure you know.'"

On 8 February 2019, Venezuela Analysis published an article entitled "The BBC and Venezuela: Bias and Lies", which began:

The mass media under capitalism is part of the state machine and uses its influence and “prestige” of being “objective” and “independent” to play an important role in the propaganda element. In the UK, the BBC has perfected its skills in preparing the population to accept that any coup that imperialism supports is justified. And this they have done about Venezuela.

"The BBC programme 'Revolution in Ruins: The Hugo Chavez Story', broadcast on 16 January, sought to prepare viewers to accept and support any moves against President Maduro, as the inheritor of Chavez’s legacy. And within a week, an attempted coup had begun![6]

In November 2011, President Hugo Chavez ordered the repatriation of 85% of the country's bullion reserves (some 160 tonnes of gold, worth more than $11bn) to protect Venezuela's reserves from global economic turbulence:

"The gold is returning to where it was always meant to be: the vaults of the Central Bank of Venezuela," Mr Chavez said.

Critics suggested that Mr Chavez was acting out of fears that Venezuela's overseas assets could one day be frozen by sanctions, as happened to his friend and ally, the late Libyan leader Muammar Gaddafi.

Most of Venezuela's foreign gold reserves are held in London.[7]

On 7 February 2019, Ken Livingstone joined protesters to demand that the Bank of England returns the remaining $1.3 billion of Venezuela’s gold. Livingstone said:

"The holding of this gold is part of the UK’s slavish following of Trump’s support for a coup and possible military intervention."[8]

On 2 July 2020, the UK High Court ruled against Venezuela's government in a legal battle over access to $1bn (£820m) of gold stored in the Bank of England. Judge Nigel Teare said:

Lawyers for the Venezuelan Central Bank, which brought the case, said they would appeal against the judgment.[9]

In September 2020, the Maduro Board of the Central Bank of Venezuela successfully appealed to the Court of Appeal:

Question: Does Her Majesty's Government (formally) recognise Juan Guaidó or Nicolás Maduro and, if so, in what capacity, on what basis and from when? Answer: No. While such recognition is conclusive for the purpose of determining who is the de jure President of Venezuela, it leaves open the possibility that HMG may impliedly recognise Mr Maduro as the de facto President of Venezuela.[10]

On 19 July 2021, the Guaidó Board of the Central Bank of Venezuela appealed to the UK Supreme Court.[11]

The proceedings can be viewed live here.[12] 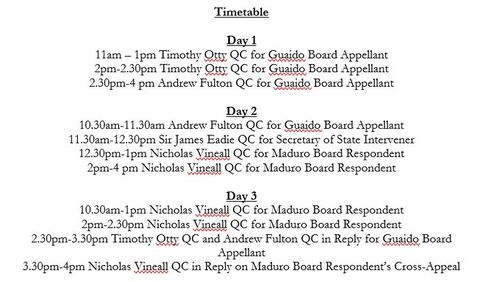 In January 2021 the Daily Maverick reports on a Foreign Office connected foundation which allocated £750,000 on a ‘democracy-promotion’ program and an allocation of £250,000 to ‘influence’ local and national ‘media agendas’.[13]

Citizens of Venezuela on Wikispooks