Virgilio Paz Romero (who has many aliases) worked for Operation 40 as an assassin. He served 6 years in prison in the USA for killing Orlando Letelier.

Paz's family left Santa Clara, Cuba in the mid-1960s when he was 14.[1] In 1966 while his family was in Mexico City awaiting papers to emigrate to the United States, Paz's father died.[1] He settled in a Cuban community in New Jersey with his mother.[1] When he was 16, Paz was the youngest member of the Cuban Nationalist Movement.[1] 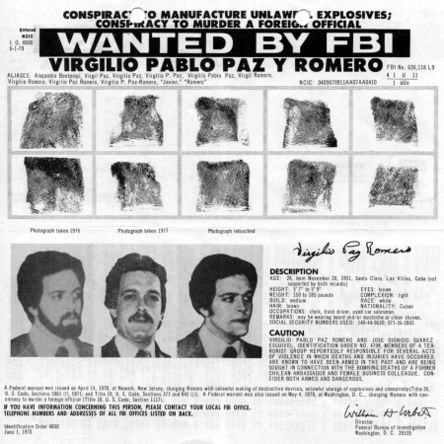 He was an Operation 40 member. He was sought for the Orlando Letelier assassination.

In July 1991, Paz Romero pleaded guilty in the conspiracy to assassinate Orlando Letelier, and on September 13, 1991, he was sentenced to 12 years in prison. He was paroled after serving half of his sentence, and an immigration judge ordered him deported.[2] Given that the United States did not have a deportation agreement with Cuba, he was placed into indefinite custody of the Immigration and Naturalization Service.[2] In July 2001 after the Supreme Court of the United States ruled that indefinite detentions were unconstitutional, Paul Huck of the United States District Court for the Southern District of Florida ordered Paz Romero released.[2]