Vulture funds are usually[clarification needed] a private equity group or fund that buys defaulted debt that belongs to individuals, companies or nations. They are criticised as being ruthless[1] in pursuing the debt they have purchased, often negating any gains the debtor has made in managing the debt or pursuing debt relief. They also often engage in payments to government, paying well connected lobbyists or making large donations to political parties.

In 1996, there was what Saskia Sassen termed "a groundbreaking moment in the modern history of finance", when a New York judge "broke with long-standing international law and custom, according to which sovereign governments are not sued in regular courts meant to deal with questions internal to a nation state" and agree to hear a case brought by Elliott Associates for recovery of Panamanian debt.[2]

Vulture fund have been the subject of increasing criticism, and were a target of Occupy Wall St.[3] 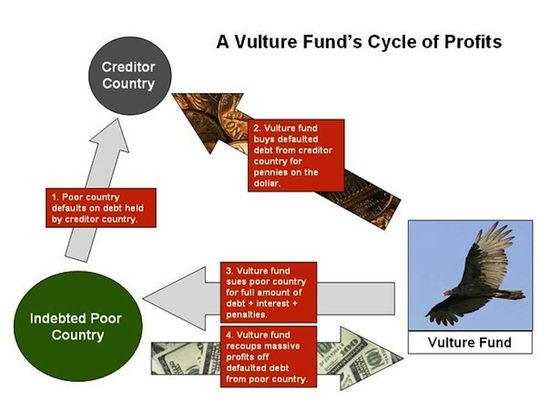 The United Kingdom was the first country to impose a legal limit on vulture funds. Since 8 April 2010, vulture funds may not collect payments that the World Bank deems "unsustainable".[4]

On September 9, 2014, the UN voted 124-11 to create an "historic" new treaty to deal with bankruptcy process of nation states, limiting their exploitation by vulture funds.[5]

In 1996 Paul Elliot Singer purchased Peruvian debt for $11M and then threatened to sue unless he received the full $58M.[6]

Romania loaned $40M to Zambia to buy tractors in 1979, in 1999 unable to keep up the payments they negotiated to settle the debt for $3M but before this could happen Debt Advisory International stepped in and purchased the debt for $4M they then commenced to sue for the original amount plus interest.[7]

Peter Grossman purchased the Congolese debt for a Bosnian state company, EnergoInvest for $2.6M. He then successfully sued the DRC for $100M.[8]