Pearl Harbor was attacked on 7 December 1941 by Japanese forces, an event which facilitated the entry of the USA into World War II.

A surprise military strike by the Imperial Japanese Navy against the United States naval base at Pearl Harbor, on the morning of December 7, 1941. The attack commenced at 7:48 a.m. Hawaiian Time. The base was attacked by 353 Japanese fighter planes, bombers, and torpedo planes in two waves, launched from six aircraft carriers. 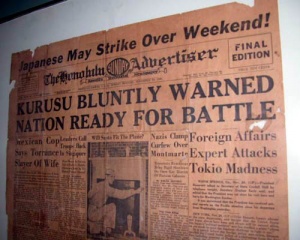 Was this really a surprise attack?

Although the United States had declared neutrality with the Neutrality Acts, there was a large amount of international pressure to enter the war, especially from the British. In response to this, Franklin Roosevelt began searching for ways to enter the war without violating the neutrality acts. For the European Theater, this came in the form of the Lend-Lease Act. The U.S. began aiding supplies including warships and warplanes, with other forms of aid. However, with Japan expanding as a key member of the Axis Powers and claiming much territory in China and the South Pacific, there became a need to find a way to engage Japan. Still a non-belligerent, the FDR administartion searched for ways to provoke Japan into declaring war on the United States. Despite the growing threat of the Japanese empire to American investments in the Southwest Pacific, the American public was still largely opposed to intervention, due to the horrors of WW1. The Military-industrial complex needed an attack to happen that would mobilize the public behind the war effort. [1]

A book by historian and WW2 Navy veteran Robert B. Stinnett, "Day Of Deceit: The Truth About FDR and Pearl Harbor" exposes foreknowledge. The White house a year before Pearl Harbor had launched an 8-point plan as a strategy to provoke Japan into war against the U.S. It was named after Arthur H. McCollum, who, provided the president with intelligence reports on Japan and oversaw every intercepted and decoded Japanese military and diplomatic report destined for the White House. [2]

"The best ships in the seventh fleet were conveniently out of harm’s way when Pearl Harbor was attacked, leaving only older less seaworthy ships to be sunk, and giving President Roosevelt the casus belli he needed to get America into WW2".[3]

"It is not believed that in the present state of political opinion the United States government is capable of declaring war against Japan without more ado [...] If by [the elucidated eight-point plan] Japan could be led to commit an overt act of war, so much the better."

The FDR administration took many steps to make sure that the Japanese attack would be successful. These steps included measures to hide information from the commanders in Hawaii about the location of Japanese war ships, denying their requests to allow them to scout for Japanese ships, and other actions in order to blind the commanders in Hawaii so that the attacks would succeed. [5]

The heads of the Army and Navy disappeared and remained unreachable on the night before Pearl Harbor. And they would later testify over and over that they “couldn’t remember” where they were. [6]

The Army’s Chief of Staff informed the Washington bureau chiefs of the major newspapers and magazines of the impending attacks before they occurred (see above), and swore them to an oath of secrecy, which the media honored. [7]

Two weeks after Pearl Harbor, the Navy classified all documents relating to the attacks top secret, and the Navy Director of Communications sent a memo ordering all commanders to “destroy all notes or anything in writing” related to the attacks. Most importantly, all radio operators and cryptographers were gagged on threat of imprisonment and loss of all benefits. [8]

John Ainsworth-Davis wrote in 2006 in Op JB that under the command of Ian Flemming, he destroyed the Dutch submarine K-XVII after they stumbled across the Japanese fleet heading for Hawaii to prevent any risk that the attack might not happen due to its surprise nature being dissipated.[9]