The Dieppe Raid was an attack carried out on 19 August 1942 against the German held city of Dieppe.

A total of 3,367 of the 6,086 men (almost 60%) who made it ashore were either killed, wounded, or captured. The Royal Air Force failed to lure the Luftwaffe into open battle, and lost 106 aircraft, compared to 48 lost by the Luftwaffe. The Royal Navy lost 33 landing craft and one destroyer. 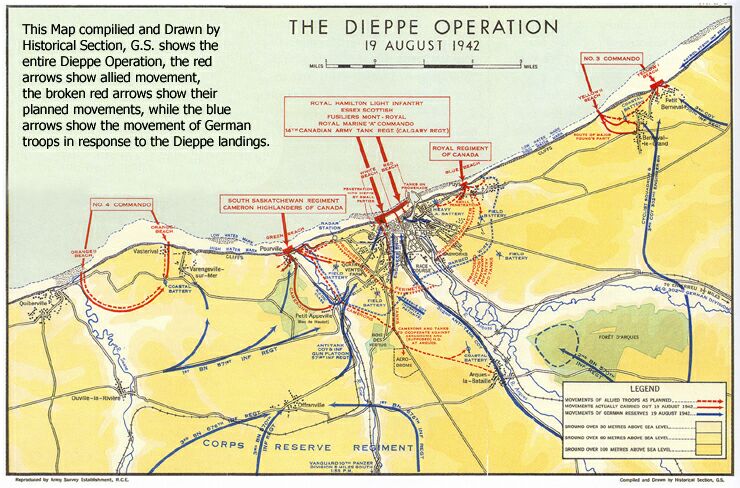 Harold Goulding of the Special Boat Service was mentioned in dispatches as the "Senior Landing Officer" for Blue Beach during the Dieppe raid. Reports indicate that a mistake of Lieutenant J. I. Lloyd delayed the landing by 15 minutes when the boats were forming up,[1] after which "[Goulding']s actions resulted in further delay".[2] The delay of the Blue beach landing of the 13th Canadian Infantry Division is reckoned to have greatly aggravated the casualties.[1]

In Op JB, John Ainsworth-Davis writes that he watched from a clifftop as the events unfolded, in the company of senior Nazi officers. By his account, the raid went according to plan. He states that its 'failure' was in fact a subterfuge - that the soldiers and material was a conscious sacrifice to the greater cause of bolstering Ainsworth-Davis' credibility as a traitor to the UK government.