Manufacturing of weapons is a highly profitable business, as is arms dealing. Many people have suggested that the practices are morally dubious, which is no doubt why euphemisms such as the "defence sector" are often employed to refer to this area of business.

Mass production of weapons is not as constrained as the use of weapons and military hardware, although special legal restrictions apply to certain weapons of mass destruction - in particular to biological weapons, chemical weapons and nuclear weapons.

Laws surrounding international supply of arms are usually a gray area, allowing leeway for the deep state to control and profit from such transactions, extracting levies in the form of various fees. There is at least some effective control of weapons deals, as evidenced by the criminal charges filed in, for example, the Arms for Libya deal which in 1977 moved about 20 tonnes of plastic explosive to Muammar Gaddaffi's Libya, together with training in how to use it to produce bombs. 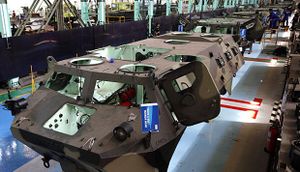