The Yom Kippur War or October War was fought by a coalition of Arab states led by Egypt and Syria (Soviet proxies) against Israel, the US client state, from 6 to 25 October 1973.

Military action during the war took place mainly in the Sinai and the Golan Heights, territories that were occupied by Israel since the 1967 Six-Day War. Egypt wanted to regain the Sinai and to reopen the Suez Canal whilst Syria aimed to retake the Golan Heights. At the time of the Yom Kippur War, Richard Nixon was US president, Leonid Brezhnev was the Soviet leader, Israel was led by Prime Minister Golda Meir, Egypt by President Anwar Sadat and Syria by President Hafez al-Assad.[1]

The war began when the Arab coalition launched a joint surprise attack on Israeli positions in the Israeli-occupied territories on Yom Kippur, the holiest day of prayer and fasting in the Jewish calendar, which also occurred that year during the Muslim holy month of Ramadan. Egyptian and Syrian forces crossed ceasefire lines to enter the Sinai Peninsula and the Golan Heights respectively, areas which Israel had captured six years earlier in the Six-Day War.

Both the United States and the Soviet Union were surprised, and initiated massive resupply efforts to their respective allies during the war, and this led to a near-confrontation between the two nuclear superpowers.[2]

The Yom Kippur War occurred after the 1973 Bilderberg meeting which discussed a dramatic increase in oil prices. It resulted in a large increase in oil prices. A causal connection is therefore a real possibility. Bichler, Rowley and Nitzan come to this conclusion, stating that "Middle Eastern wars were the instrument of oil crises" (rather than their cause) in order to secure huge petrodollar profits in a power-grab.[3]

The combined forces of Egypt and Syria totalled the same number of men as NATO had in Western Europe. On the Golan Heights alone, 150 Israeli tanks faced 1,400 Syrian tanks and in the Suez region just 500 Israeli soldiers confronted 80,000 Egyptian soldiers.

Other Arab nations aided the Egyptians and Syrians. Iraq transferred a squadron of Hunter jet fighter planes to Egypt a few months before the war began. Iraqi Soviet-built MIG fighters were used against the Israelis in the Golan Heights along with 18,000 Iraqi soldiers. Saudi Arabia and Kuwait effectively financed the war from the Arab side. Saudi troops – approximately 3,000 men – also fought in the war. Libya provided Egypt with French-built Mirage fighters and, in the years 1971 to 1973, had bankrolled Egypt’s military modernisation to the tune of $1 billion which was used to purchase modern Soviet weapons. Other Arab nations that helped the Egyptians and Syrians included Tunisia, Sudan and Morocco. Jordan also sent two armoured brigades and three artillery units to support the Syrians, but their participation in the war was not done with vast enthusiasm – probably because King Hussein of Jordan had not been kept informed of what Egypt and Syria planned.

Within two days, the Egyptians had crossed the Suez Canal and moved up to 15 miles inland of the most advanced Israeli troops in the Sinai. Syrian troops advanced by the same distance into the strategic Golan Heights in North Israel. By the end of 7 October 1973, the military signs were looking ominous for Israel. After three days, Israel had mobilised most of its forces and halted the Egyptian offensive, resulting in a military stalemate. The Syrians coordinated their attack on the Golan Heights to coincide with the Egyptian offensive and initially made threatening gains into Israeli-held territory. Within three days, however, Israeli forces had pushed the Syrians back to the pre-war ceasefire lines.

The Israel Defence Forces (IDF) then launched a counter-offensive deep into Syria. Using the main road from Tiberias to Damascus, the Israelis got to within 35 miles of the Syrian capital and began shelling the outskirts of Damascus. President Sadat was concerned about the integrity of Egypt's major ally, and believed that capturing two strategic mountain passes located deeper in the Sinai would make his position stronger during post-war negotiations. He therefore ordered the Egyptians to go back on the offensive, but their attack was quickly repulsed. The IDF pushed back the Egyptian military and crossed the Suez Canal south of Ismailia, using the Suez-Cairo road to advance towards the Egyptian capital, and got to within 65 miles of Cairo.[4][5]

On 22 October 1973 a United Nations–brokered cease-fire quickly unravelled, with each side blaming the other for the breach.[6] Within days, the IDF had improved its position considerably by completing the encirclement of Egypt's Third Army and the city of Suez, a development that led to tensions between the United States and the Soviet Union.

In the following months, Israeli and Egyptian forces disengaged along the Suez Canal region. Here, the IDF managed to keep control over the strategic Sinai Desert – an area serving as a buffer to ensure any further fighting there did not spill over into Israel itself. In June 1974, some 1,250 UN peacekeeping troops were deployed in the Golan Heights to monitor the ceasefire between Israel and Syria.[9] Four decades later and without an Israel-Syria peace agreement, the United Nations Disengagement Observer Force (UNDOF) remains in the Golan Heights.[10]

The Yom Kippur War had far-reaching implications. The Arab World, which had experienced humiliation in the lopsided rout of the Egyptian–Syrian–Jordanian alliance in the 1967 Six-Day War, felt psychologically vindicated by early successes in the conflict. In Israel, despite impressive operational and tactical achievements on the battlefield, the war led to recognition that there was no guarantee that Israel would always dominate the Arab states militarily.

US Secretary of State Henry Kissinger, acted as a peace broker between Egypt and Israel who, in September 1975, signed an interim agreement which declared their willingness to settle their differences by peaceful means rather than by military. The 1978 Camp David Accords that followed the 1977 ‘Sadat Initiative’ led to the return of the Sinai to Egypt and normalised relations — the first peaceful recognition of Israel by an Arab country. Egypt continued its drift away from the Soviet Union and left the Soviet sphere of influence entirely.

Egypt's President Sadat, having adopted the mantle of the former president Colonel Nasser in confronting Israel and the West, was seen by many Arabs to have betrayed them by adopting a diplomatic approach to solving the region’s problems. He was assassinated in 1981, a killing which the official narrative attributes to "Muslim fundamentalists". 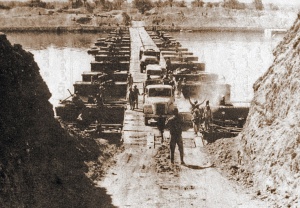 +
Has image2
File:Bridge_Crossing.jpg +
Has location
Golan Heights +, Suez Canal +  and Surrounding regions +
Has noRatings
0 +
Has objectClass
Event +
Has objectClass2
Event +
Has perpetrator
Bilderberg/1973 +
Has revisionSize
9,726 +
Has revisionUser
Robin +
Has wikipediaPage
https://en.wikipedia.org/wiki/Yom Kippur War +
Has wikipediaPage2
https://en.wikipedia.org/wiki/Yom_Kippur_War +
Is not stub
true +
ON has perpetrator
Egypt +  and Syria +
Start
October 6, 1973 +