From Wikispooks
< YouTube
Jump to navigation Jump to search

YouTube Censorship has accelerated since the "Fake News" meme was launched in 2016. In 2018 Mike Adams registered youtubecensorship.com to begin reporting on it and created the new video hosting platform Brighteon.[1] 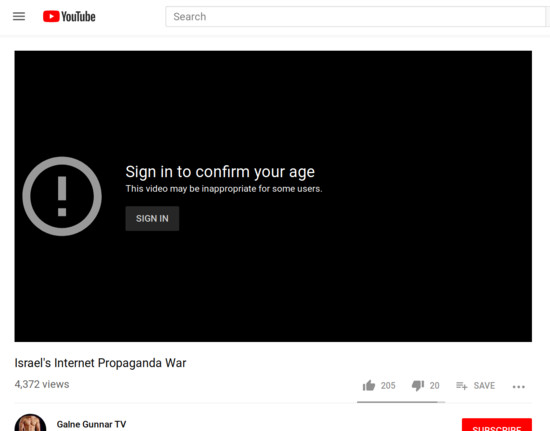 After his channel was deleted, Sayed Hasan charged that "Youtube strives to hide its censorship behind a pseudo-legalistic procedure."[2] Soft censorship tactics include labelling content as age inappropriate, i.e. requiring users to sign in before viewing it.

In Summer 2019 YouTube announced new policies to bad any videos "alleging that a group is superior in order to justify discrimination, segregation or exclusion." This policy took effect immediately.[3] Google CEO clarified that would also target borderline "content which doesn't exactly violate policies".[4]

In December 2019, YouTube CEO Susan Wojcicki admitted what had long been surmised, that the "trending" content on YouTube was subject to human censorship. She stated that “We just do a human check to make sure that the content that’s there makes sense to be on the Trending page and available for everyone”, but did not elaborate further.[5]

"YouTube may terminate your access, or your Google account’s access to all or part of the Service if YouTube believes, in its sole discretion, that provision of the Service to you is no longer commercially viable."[6]

For over a week after the Christchurch Mass Shooting, the filtering features on Youtube were disabled.[7] Youtube later admitted that it had deliberately made it harder to find certain videos.[3]

YouTube said it would be making changes to its recommendations algorithm to explicitly deal with "conspiracy theory" videos. The company says the update will reduce the suggestion of “borderline content and content that could misinform users in harmful ways.” YouTube clarified what kind of videos fit that description by providing three examples: “videos promoting a phony miracle cure for a serious illness, claiming the earth is flat, or making blatantly false claims about historic events like 9/11.” The company clarified that this content doesn’t necessarily violate its community guidelines. This means that while the content may still exist on YouTube, the site’s algorithm will omit these videos from being recommended to its users.[8]

In 2018, of Sayed Hasan criticised YouTube after it removed his channel on December 2017. This has had 400 videos and over 6 million views, "subtitled in French and English speeches of Sayed Hassan Nasrallah, Secretary General of Hezbollah", explaining that it was a “violation of the rules concerning violent or graphic content on Youtube”. This contrasts with its acceptance of Donald Trump's threat to “completely destroy” North Korea "or the Israeli bragging about bombing Iran and toppling its regime, assassinating Hassan Nasrallah".[2]

In February 2018, Youtube removed a video of an eyewitness to the Stoneman Douglas High School shooting, stating that it "violates our guidelines".[10] Also in February the channel of Richie Allen was removed for interviews he did with Wolfgang Halbig and Michael Rivero with a third strike pending.[11]

Mark Crispin Miller reports in December 2018 that YouTube had removed a video of Mort Sahl speaking about the JFK Assassination.[13]

Prompted by the removal of a video he had posted about the 2017 Las Vegas shooting, Mike Adams reported in December 2017 on "the worsening pattern of censorship of political speech by YouTube."[15]

In 2016, YouTube announced that making "negative comments" about someone else and hurting their feelings might be considered sufficient grounds for the to censor content.[16] The political commentator Gabe Zolna,[17] who had some very caustic remarks towards Hillary Clinton during the 2016 US election, had his channel with 18,300 videos[18] and sometimes tens of thousands of views[19] the same year removed with strikes in short succession.[20]

The comment sections of political or government critical videos of some channels received a huge uptick in Spam comments since around mid 2015.[21] Channels like Truthstream Media, who experienced manipulation of their view counts since around the same time[22] had on very successful videos, that generated tens of thousands of views in the first weeks, a comprehensible number of postings, which enabled the onlooker to read through the discussion and get an overview about the opinions that get exchanged. The comment section of this channel and others got flooded noticeable at one point, drowning any sensible discussion with several hundreds of annoying and useless statements and replies.