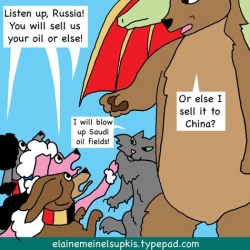 In my previous post, I mentioned that western leaders are going through a clear phase of self-delusion and panic. I want to add a short comment about the self-delusion part.

I am amazed, absolutely amazed, at the fact that EU politicians, and the MSM which serves them, are still seriously discussing the adoption of even more sanctions against Russia when it is absolutely, totally and undeniably obvious that:

It is generally accepted that "politics is the art of the possible" and yet the EU leaders are clearly engaged in the art of the absolutely impossible. The fact that they are all pretending like this is going to have some useful impact is truly a sign of how much the EU leadership has degenerated over the years. Can you imagine Helmut Schmidt, Charles de Gaulle, Margaret Thatcher, François Mitterrand or Francisco Franco engaging in that kind of infantile nonsense? All these leaders had their bad aspects, but at least none of them were clowns, whereas when I look at the current EU leadership, especially Van Rumpey, Adners Fogh Rasmussen or José Manuel Barroso I get the feeling that I am looking at some ugly kindergarten of intellectually challenged clowns and, frankly, I can understand Mrs Nuland's feelings.

Truly the EU has degenerated to a point of no return. Hollande can play Mitterrand, but he is no better at that than Quayle was at playing Kennedy. Why in the world the folks in east-central Europe would want to join such a terminally pathetic community is truly beyond me.

I often wonder - has everybody just gone blind?

Why doesn't everybody see that which is so obvious?

Don't they realize that the men in the Kremlin are real, tough and principled men who will only feel disgust and amusement when challenged by such non-entities whom the Mayor of London so aptly referred to as the "great supine protoplasmic invertebrate jellies". [1]

There is a saying in Russian: "to try to scare a hedgehog with a naked butt". This is what the EU is doing now. They are trying to scare Russia with sanctions which will painfully end up hurting the EU.

There is another saying in Russian: "to love the courageous/brave man in the Tatar". It means that you can love/admire courage/bravery even in your mortal enemy. To the Russian people the *culture of empty threats* coming out of the EU is simply not worthy of respect. And the fact that the one cause the Europeans love to get most vocal and indignant about is the one "gay" "rights" most certainly does not help.

In the past, the western enemies of Russia - the Papacy, the Masons, the Empires and even the Nazis - all were formidable in their own way. Maybe the Russians did not fear them, but they often sincerely admired them (the French) or, at least, admired their courage (the Germans). These were worthy enemies.

But now Russia looks at the EU with a total sense of disgust and I would even argue that the Russians have far more respect for the USA than for the EU. For example, Russian commentators often make the point that the western sanctions against Russian only hurt Europe, not the USA. And while they like to make fun of individual US politicians, they also admit that the US has superbly manipulated the EU and the Ukrainian elites. And NATO can now threaten to create a rapid deployment force of 10,000 men, but you can be sure that the priority of the GRU will be to keep an eye on US forces, not on the EU clowns in combat fatigues.

I have left Europe 12 years ago so I really don't know, but I often wonder: do the Europeans realize how utterly pathetic their leaders are? Do they see that they are lead by non-entities, "office plankton in suits", pathetic intellectually challenged clowns?

On another note, I often speak of the Ukie "freaks". But there is one guy which I personally find very likable on a personal, human level. I might shock you, but regardless of his crazy ideas, as a person Dmitri Iarosh seems to be a very nice guy. I have recently watched an hour long interview of him (here, but it is in Ukrainian) and I could not help finding him very likable. He has a very charming and a little bit shy smile and he is not pretentious at all. He does not even seem to be hateful in the way that, say, Tymoshenko or Poroshenko are. I certainly would welcome the opportunity to talk to him, even if after our conversation I end up slitting his throat. But when I see Van Rumpey or Rasmussen I think of yet another Russian expression: "this face begs for a brick". To them I have nothing to say at all.