Template:Counter-Terrorism Portal badge Operation Nicole is an initiative (part of the PREVENT agenda) that was developed by the Lancashire Constabulary and recommended for wider use by the Association of Chief Police Officers (ACPO). The project is a tabletop exercise, which intends "to bring mainly Muslim communities and police officers together" [1] to allow a space for the police to explain to Muslim community members how and why they take their operational and logistical decisions in relation to counter-terrorism operations. In order to best explain why they take certain actions, community members are encouraged to play police officers' roles and take part in counter-terrorism simulation exercises.[2] As can be seen from the below 'pyramid' diagram, Opeation Nicole is part of the second tier of the PREVENT programme - the 'targeted approach' - which aims to specifically 'target' those elements of the Muslim community that are believed to be most at risk of becoming extremists. 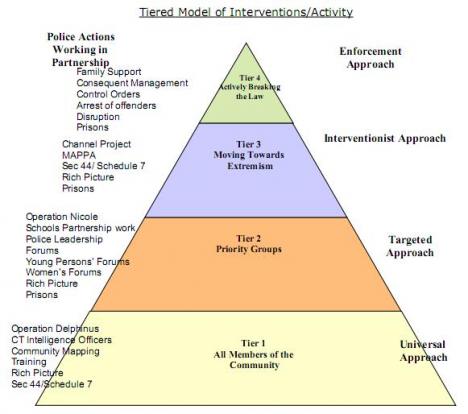 The official aim of the project is to:

"give participants a better understanding of the factors that support the decision-making process from the time that information is received through to the point of planned police action. The strength of these exercises is the opportunity for communities to explore the reasoning behind the need to arrest people for terrorist offences. These exercises very clearly demonstrate the hard choices that have to be made and the care that is taken in making them. [4]

The Lokahi Foundation, which has been involved in facilitating Operation Nicole, understands the project to be:

"a joint community/police training event generating intensive dialogue between a national police body and members of the Muslim communities. The aim is for each to understand what it feels like to be in the others’ shoes and have to take key decisions, especially when it all starts to fall apart."[5]

Staffordshire University Student's Union, was invited to take part in Operation Nicole, but refused. the Union issued a statement which criticised Operation Nicole for being an activity which was based on "surveillance or spying" and accused it of being "a continuation of the witch hunt against Muslims and student activists...designed to stigmatize certain sections of the community to justify the ‘War on Terror’..." [6]