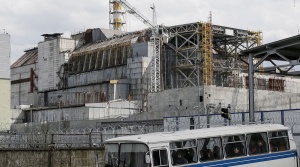 The world has had 30 years to assess the consequences for life on Earth of the disaster at Chernobyl.

This is about the same period during which I have studied the effects of radioactive pollution on the planet. It was the radioactive rain in the mountains of North Wales, where I lived in 1986, that brought me into this strange Alice in Wonderland area of science, where people and children die, and the global authorities, advised by physicists, deny what would be obvious to a child at school.

Chernobyl was mentioned as the star that fell to earth in the Book of Revelations. You may laugh, and it may be a coincidence, but the impact of the event has certainly been of biblical proportions. It is a story about the imposition by reductionist science on humanity of a version of the truth constructed from mathematics, not the only one, but perhaps the most important, since it involves the systematic destruction of the genetic basis of life. It is a story of lies, secrecy, power, assassination and money: the vast amounts of money that would be lost if the truth came out.

Shortly after the murder in 1992 of the German Green Party leader and anti-nuclear activist Petra Kelly, the late Prof Ernest Sternglass (the first of the radiation scientist/ activists) told me that Kelly had just struck a deal with a German TV company to run a series demonstrating the true awfulness of the immediate effects of radiation. He said: if the truth came out, all the Uranium and the billions of dollars in Uranium shares would turn into sand. So something like a cover-up had to happen, and it did, continuing the process of chicanery and control of information that began with the nuclear weapons tests of the 50s and 60s. In 1959, as the genetic effects of the atmospheric tests became apparent, the control of the understanding of radiation and health was wrested from the World Health Organization (WHO) and passed to the International Atomic Energy Agency (IAEA).

Since then, no research on the health effects of radiation has been carried out by WHO, which has led to a permanent vigil outside their headquarters in Geneva by the group Independent WHO.

The arguments about the health effects of Chernobyl have mostly centered on cancer. I won’t write much about cancer here. The study of radiation and cancer has many complications, including that the data is often suspect, the time lag between the cancer diagnosis and the original radiation exposure can be 20 years, in which time a lot can happen, introducing ammunition (and opportunity) for those denying causation. The predictions of the global cancer yield of the Chernobyl contamination has ranged from around a million (as predicted independently by the European Committee on Radiation Risk (ECRR), Rosalie Bertell, John Gofman and me, to about 600,000 (Alexey Yablokov), to less than a few thousand (the International Commission on Radiological Protection (ICRP), whose risk model is the current basis for all legal constraints on radioactive releases in Europe.

Cancer is caused by genetic damage but takes a while to show. More easily studied is the immediate and direct genetic damage, demonstrated in birth rates of congenital diseases, birth defects, fetal abnormalities, data which is easier to locate. The effects of a sudden increase in radioactive contamination are most easily seen in sudden increases in these indicators. You don’t have to wait 20 years. Out they come after nine months or in aborted fetuses with their heart and central nervous system defects, their lack of hands and feet, their huge hydrocephalic heads, their inside-out organs, their cleft palates, cyclops eyes and the whole range of dreadful and usually fatal conditions. There is no argument, and the affair is in the hands of doctors, not physicists. The physicists of the ICRP base their risk of genetic effects on experiments with mice.

I was in Kiev in 2000 at the WHO conference on Chernobyl. On the podium, conducting the theatricals, were the top men in the IAEA (Abel Gonzalez) and the United National Scientific Committee on the Effects of Atomic Radiation (UNSCEAR), represented by Canadian Norman Gentner. "No effects can be seen"—Abel Gonzalez. "Internal radiation is the same as external"—Norman Gentner. Happily you can watch this farce as it was videotaped by a Swiss team.

So: cut to the chase, to the fatal assault on the edifice of the current ICRP radiation risk model. In January 2016 Prof Inge Schmitz Feuerhake, Dr Sebastian Pflugbeil and I published a major review paper on the genetic effects of radiation in the prestigious Korean peer-reviewed Journal of Environmental Health and Toxicology.

What the research shows is that in every corner of the ex-Soviet Union and Europe and even further afield where epidemiologists and pediatricians looked, there were large and statistically significant increases in congenital diseases at birth and in babies that were aborted.

The new article recalculates the genetic risk from radiation based upon reports from Germany, Turkey, Greece, Croatia, Egypt, Belarus, Ukraine, Russia, Hungary, Italy, the UK, Scotland, Wales, indeed everywhere where anyone looked. There was a sudden jump in birth defects immediately following the contamination from Chernobyl and in proportion; but only up to the point where the exposure was so great the babies died in the womb or miscarried early in pregnancy. Thus, the relation between exposure level and effect was not a simple one where the birth defects increased with exposure: after a critical level of exposure they leveled off, or indeed fell. Also since contamination is still there, women are still giving birth to genetically damaged children some 30 years later. These results, published by many doctors, epidemiologists and researchers in many different journals, show that the effects occurred at levels of contamination that provided ‘doses’, that yardstick of radiation exposure invented by the ICRP, that were very low, often below the natural background dose.

It is worse: from research on the nuclear test site veterans’ grandchildren (also reviewed in the study) it is clear that these effects continue down the generations and will only disappear when an offspring dies without issue, and leaves the genome of the human race. And many will or already have done: since what causes genetic malformation in the infant, at a larger dose causes fetal death and infertility. No one can have failed to have noticed the increase in human infertility that has occurred since the radioactive contamination of the planet began in the 1950s. As ex- US Atomic Energy Commission scientists John Gofman wrote in 1981 "the nuclear industry is waging a war on humanity".

How can it be possible that the legislative system has got it so wrong? The answer is also given in the paper. It is that the concept of ‘dose’ which may be convenient for the physicists as it is simple to compute, really does not address the situation where the substances that provide the dose are inside the body, often bound chemically to the DNA, which is the acknowledged target for all these genetic effects. It shows that the human genome (and of course that of all life) is exquisitely sensitive to radiation damage from such internal exposures, to Strontium-90, Plutonium-239, Uranium and particularly to the nano-particles containing these radioactive elements which were produced when the reactor No 4 blew apart.

The paper shows the studies of the Hiroshima bomb survivors, upon which the current unsafe radiation laws are based were faulty because the true comparison group, those not in the city at the time of the bombing, was abandoned when it began to look like there was a real effect. Was this stupidity? Was it a trick? Does someone have to go to jail?

Last month, Prof. Alexey Yablokov, Dr. Alex Rosen and I wrote to the editor of The Lancet, in a recorded delivery letter posted by the Independent WHO in Geneva, requesting space in that influential journal to draw attention to these truths and overturn the false and dangerous structures created by the physicists. Let us all hope that some good will finally come of the disaster—that the real legacy of Chernobyl will be the understanding of the true danger to health of radioactive pollution.

Note: The ECRR has focused on Chernobyl as a major data source for establishing the risk posed by radiation. It has concluded that the current ICRP model is in error by upwards of about 300-fold, for some types of internal exposures, by upwards of 1000-fold. This means that over the period of the radiation contamination, more than 60 million people have died from cancer as a result of the releases.

This risk model is available on the website http://www.euradcom.eu