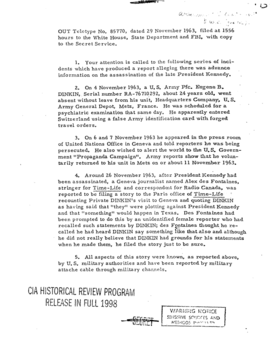 1. Your attention is called to the following series of incidents which have produced a report alleging there was advance information on the assassination of the late President Kennedy.

3. On 6 and 7 November 1963 he appeared in the press room of United Nations Office in Geneva and told reporters he was being persecuted. He also wished to alert the world to the U.S. Government "Propaganda Campaign". Army reports show that he voluntarily returned to his unit in Metz on or about 11 November 1963.

4. Around 26 November 1963, after President Kennedy had been assassinated, a Geneva journalist named Alex des Fontaines, string for Time-Life and correspondent for Radio Canada, was reported to be filing a story to the Paris office of Time-Life reCounting Private DINKIN's visit to Geneva and quoting DINKIN as having said that "they" were plotting against President Kennedy and that "something" would happen in Texas. Des Fontaines had been promoted to do this by an unidentified female reporter who had recalled such statements by DINKIN; des Fontaines thought he recalled he had heard DINKIN say something like that also and although he did not really believe that DINKIN had grounds for his statements when he made them, he filed the story just to be sure.

5. All aspects of this story were known, as reported above, by U.S. military authorities and have been reported by military attache cable through military channels.