Document:Hushing Up - and Profiting from - Saudi Aggressions while Warmongering against Russia 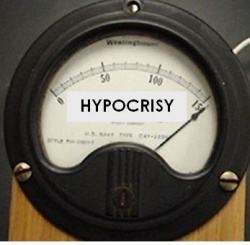 
Author's Note The West has portrayed Russia’s annexation of Crimea as an aggression, but the re-integration of Crimea into Russia can be understood as a pre-emptive measure on the part of Moscow to preserve Russian access to a strategically important naval base at Sevastopol, from which the Russian Black Sea fleet likely would have been ejected by the new Russophobe regime in Kiev. While a highly visible campaign has been mounted in the West of demonizing Russia’s president Vladimir Putin to mobilize popular support for tough measures against Russia, the West has supported major aggressions by Saudi Arabia in Bahrain and Yemen. While Western politicians and commentators have vociferously condemned Russia’s “aggressions,” they have met the Saudi aggressions, which are on another scale entirely, with almost complete silence.

France cancelled the sale to Russia of two Mistral warships in response to “Moscow’s intervention in Ukraine,” [1] but announces that it is perfectly happy to sell the same warships to a coup government in Egypt, which has a deplorable—though in the West, largely glossed over—human rights record. Since Egypt’s Western-backed dictator Abdel Fattah Sisi “came to power in a coup two years ago, his government has criminalized street protests, sentenced hundreds to mass death in mass trials, and, according to the Egyptian Center for Economic and Social Rights, imprisoned some 40,000 political opponents and their supporters.” [2] On top of the possible sale of the Mistral warships to Cairo, France announced in February “the sale of nearly $6 billion worth of military hardware to Egypt, including two dozen Rafale fighter jets and a naval frigate.” [3] 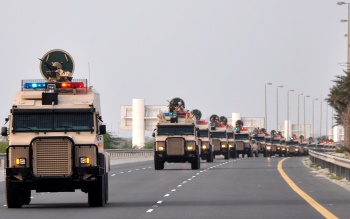 Based on France’s purported commitment to the principles of equality, fraternity and liberty, one might think its government would have some reservations about striking weapons deals with a politically repressive regime which gags journalists, marches tens of thousands of political opponents into jail, and has condemned to death the elected president it overthrew. Certainly, France makes much of its commitment to liberal democratic values. How, then, could it support a regime that represents the very antithesis of the values it professes to cherish–unless the profits of France’s substantial citizens are senior to all other considerations?

Not to be outdone, in either arming an Arab dictator or exhibiting stunning hypocrisy in doing so, the United States gives Cairo $1.3 billion annually in military aid—effectively a pre-paid credit card for use in the US arms bazaar. The annual largesse, briefly suspended as a pro forma response to the coup for public relations purposes, has been resumed. In March, US “President Barack Obama agreed to release to Egypt a dozen F-16 attack aircraft and other military equipment,” including 12 F-16 aircraft, 20 Harpoon missiles, and 125 M1A1 Abrams tank kits. [4]

Meanwhile, the Canadian government, which, along with France, has made a show of deploring Russian “intervention” in Ukraine—and met it with its own interventions in encouraging the Maidan uprising, and in providing military training to Ukrainian militias—has facilitated a $15 billion sale of light armored vehicles to Saudi Arabia by General Dynamics Land Systems Canada. Significantly, “it was Canadian-made fighting vehicles that Saudi Arabia sent into Bahrain in 2011 to help quell a democratic uprising.” [5] So, while France cancelled a deal to deliver Mistral warships to Russia owing to Russian intervention in Ukraine, Canada arms Saudi Arabia with the very same equipment the kingdom’s military used to intervene in Bahrain to suppress protestors demanding a representative, democratically-elected, government. France too is arming the Saudi defenders of illegitimate royalist rule. In June, it “announced plans to sell $12 billion worth of equipment to Saudi Arabia, including civilian helicopters and naval patrol boats.” [6] No pressure is exerted on Canada or France by the EU or Washington to suspend their deals with the Saudi tyranny.

That Canada and France have any dealings with Saudi Arabia is remarkable, considering the country is a human rights sewer, where woman have no rights, the state regularly amputates the heads (a la ISIS) and limbs of people convicted of crimes, and there is no democracy, procedural or otherwise. Its foreign policy is as ugly as its domestic policy. It has initiated a war of aggression on neighboring Yemen, part of which involves a blockade in which one in five faces starvation. [7] It exports its benighted, medieval Wahhabi ideology, backing anti-secular, misogynistic, sectarian religious fanatics to break the backs of socialist, communist and secular national forces in the Arab world, all to the delight of the Western imperialist powers that benefit. The Saud family plunders the country’s oil wealth, investing it abroad in US banks and on arms purchases that swell the coffers of US, French and Canadian weapons manufacturers, rather than investing it at home in Arab economic development—which explains why Ottawa and Paris haven’t the slightest reservations about arming this regionally aggressive abomination. The only reservation Canada’s government has is whether the arms deal it has approved with the Saudi tyranny is acceptable to another abomination, Israel [8], whose founding principle is the dispossession of one Arab people from its land, the Palestinians, to make way for Jewish settlers from other lands. Diderot remarked that humanity would never be free until the last king was strangled with the entrails of the last priest. It might be said that the Arab world will never be free until the last Arab king is strangled with the entrails of the last Jihadi. (As Robert Dreyfuss has pointed out, the oil monarchies are ruled by royal kleptocracies whose legitimacy is nil. Most Arabs know that the monarchies were established by imperialists building fences around oil wells. [9] The kleptocracies have a symbiotic relationship with the imperialists. They loot the country and share the stolen wealth with the imperialists who provide military support.

Regarding Russia’s “intervention” in Ukraine, let’s be clear that the annexation of Crimea followed in the wake of the emergence of two major threats that arose from Washington’s sponsorship of a coup d’état in Kiev to bring to power a Russophobe government. [10]

The first threat was expressed in the European Association Agreement, whose signing became the immediate raison d’être of the Maidan rebellion that preceded the coup. The terms of the agreement direct Ukraine to reorient its economic and foreign and military policies to the West. [11] Since Ukraine is Russia’s largest trading partner, the signing of the agreement has overwhelmingly important and deleterious economic consequences for Russia. Imagine Canada and Mexico signing agreements to reorient their economies toward Russia.

There are compelling geographic and economic reasons why Russia ought to be Western Europe’s principle economic partner, and not the United States. It’s close to Western European markets and production, and offers a vast treasure trove of natural resources, easily transportable over comparatively short distances to Western European markets. A significant role for Russia in Western Europe, however, threatens US economic hegemony. To eclipse the threat, US foreign policy has long sought to weaken and isolate Russia, by keeping Western Europe locked in the US orbit, while at the same time drawing countries on Russia’s periphery into the US-superintended circle, severing their historical and geographically natural connections to Russia’s economy. Washington’s sponsorship of the Russophobe coup in a country that is Russia’s principal economic partner is part of the larger US strategy of weakening Russia through isolation from its natural markets and peripheral economies.

The second threat was expressed in the probability that the coup government in Kiev would try to evict Russia from its Black Sea naval base in Crimea, significantly undermining Russia’s security environment. Russian self-defense would be further threatened by the probability that the base would be transferred to the US Sixth Fleet. As Putin explained, “What did our partners (the West) expect from us as the developments in Ukraine unfolded?…[W]e could not allow our access to the Black Sea to be significantly limited, and could not allow NATO forces to come to Crimea and Sevastopol.” [12]

Hence, the narrative that Western foreign policy is animated by opposition to foreign aggression is challenged by the arms deals that France and Canada—whose governments profess to oppose foreign intervention—have struck with Saudi Arabia. The Saudi tyranny has intervened militarily in Bahrain against a movement for a representative political democracy, and, to the shame of the Canadian government, using light armored vehicles sold to Saudi tyrants by a Canadian arms manufacturer, approved by Ottawa. 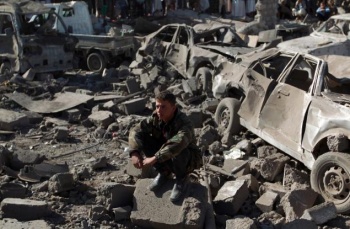 Saudi Arabia is waging a war of aggression on Yemen, in a blatant violation of international law. The war involves an air campaign, and a naval blockade that has left one in five facing starvation. US warships assist in enforcing the starvation blockade and the Pentagon provides the Saudis with logistics and intelligence support.

The Saudi tyranny has also launched a blood-soaked intervention into neighboring Yemen, with the ostensible goal of restoring to power a pro-Saudi president who was ousted in an uprising. That president, Abd-Rabbu Haddi, has virtually no support in Yemen. [13] There is some resemblance to Ukraine, i.e., a president ousted in a coup and a military response by a neighboring country, though the toppled Ukraine president was neither pro- nor anti-Russian, had far more support in Ukraine than Haddi has in Yemen, and Russia isn’t bombing Ukraine or enforcing a blockade to starve Ukraine into submission. Nor does Russia seek the restoration to power of Victor Yanukovych, the ousted Ukraine president. Yet bombing and blockade happen in Yemen, and there’s only silence in the West. US and British warships assist in maintaining the blockade. The Pentagon provides logistical and intelligence support to the Saudi bombing campaign. [14]

The entire affair is a blatant breach of international law, and an assault on authentic democracy and self-determination. Yet it is met by silence in the West (whose Saudi partner in robbing the Arabs of their oil wealth is the perpetrator.) Western politicians who rail against “Putin’s aggressions” and commentators who counsel tough measures against Moscow’s “belligerence”, have nothing to say about the US- and British-assisted Saudi war of aggression on Yemen, just as earlier they could find no words to condemn the Saudi march into Bahrain.

Imagine that Russia was bombing Ukraine and blockading its borders, instead of the Saudis doing the same to Yemen. The outcry would be deafening. Already, there is a full-throated call for aggressive economic and military action against Russia. And yet, what, in truth, was Moscow’s offense? Has it bombed Ukraine? No. Is it blockading its neighbor’s borders? No. It annexed Crimea, historically part of Russia, whose residents opposed the coup government in Kiev and welcomed their reintegration into Russia [15], and which is the site of an important Russian naval base. Russia’s actions were a predictable defensive measure against an aggressive US-led campaign to deprive Russia of its principal economic partner and its strategically important naval base on the Black Sea.

There is much to condemn and oppose: The Saudi interventions in Yemen and Bahrain; Western support for the Arab kleptocracies; the economic and military threats from the US against Russia that provoked Moscow’s defensive annexation of Crimea; royalist oppression in Saudi Arabia and the Western arms manufacturers and their partners in government who furnish the Saudi kleptocrats with weapons to suppress internal revolts. “Putin’s aggressions”—largely a fantasy—are not among them.