Document:Mandela: What the Obits Omit 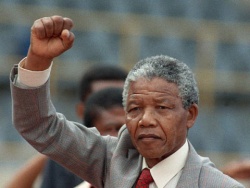 
Wikispooks Comment This is from a unabashedly right-wing magazine run by an individual of considerable old-money wealth and privilage. Wikispooks does not seek to endorse the world view that the magazine embodies. However this article encapsulates the dark, unmentionable side of the Nelson Mandela cult that is carefully and deliberately hidden from view in his post-mortem hagiography. It is illustrative of the way in which The establishment co-opts people and events it might otherwise be inclined to ignore or suppress, but whose popularity cannot be undermined. In the case of Mandela, it might even be said that he served the agenda of the Globalising neo-liberal economic elite very well indeed in that, whilst successfully bringing about the destruction of racial apartheid (against blacks anyway), the effect - consciously intended or not - has been to consolidate economic apartheid, ie globalist control of the South African economy, and to worsen the wealth disparity between the South African Black/Jewish establishment elite and its native black subjects.

Mandela: What the Obits Omit

When the kind-faced mocha Yoda named Nelson Mandela passed into the great beyond last week, the world joined hands like one big giant Coca-Cola commercial [1] to canonize and lionize and deify and sanctify his memory. The torrent of treacly encomiums and mawkish panegyrics hurled at Mandela’s glowing feet surrounded his legacy with a force field of such pulsating holiness that anyone who’s remotely skeptical or inquisitive would be able to discern it was all a mountain of shit.

This isn’t to say there was nothing to admire about the man. His stoic perseverance against all odds is the stuff of which heroic legends are made. But to keep such legends unsullied requires a vigilant and ruthless pruning of inconvenient facts that would undermine the carefully sculpted image of Human Goodness Incarnate that surrounds what was possibly the world’s most famous man.

On Friday evening, ABC’s 20/20 presented a postmortem tribute that oozed with so much sanctimonious brown-nosing that it should have been called Up Mandela’s Ass. [2] I doubt that this saccharine chunk of carefully packaged propaganda was any more idealized, unrealistic, or one-sided than the thousands of other tributes that burst forth like millions of sugarcoated tears after his passing, but I was only able to handle one Mandela tribute lest my eyes roll so violently that they pop out of my head.

“I was only able to handle one Mandela tribute lest my eyes roll so violently that they pop out of my head.”

The 20/20 special peddled such obviously fraudulent lies as the allegation that Mandela’s African National Congress was “committed to nonviolent resistance.” Not a peep was made about the fact that Mandela was sentenced to prison not only for “treason”—which is the only charge the show mentioned—but that he pled guilty to an indictment accusing him of complicity in “the preparation, manufacture and use of explosives—for the purpose of committing acts of violence.” [3] Nothing was said about the radical guerrilla army he founded called “Spear of the Nation” [4] that was linked to hundreds of acts of violence and sabotage. Nothing was said about his claim that “violence in this country was inevitable.” Nor was it mentioned that he was offered freedom from prison in February 1985 if he agreed to foreswear violence but that he refused. [5] And they certainly didn’t dare to show a clip of an ANC “necklacing” that’s one of the most brutal snippets of mob violence I’ve ever witnessed. [6] Nothing was said about the Church Street Bombing [7] or any of the other bombings and violent acts committed in the ANC’s name that in other contexts would have Mandela dubbed a violent terrorist. Instead, 20/20 referred to him with the much cheerier sobriquet of “freedom fighter.”

The show argues that Mandela was able to quell racial tensions in South Africa and bring together a “rainbow nation” merely by being big-hearted enough to endorse the country’s rugby team. We are not informed that two years after his release from prison, Mandela joined ANC members in a group sing-along of a cheery ditty whose lyrics reputedly included “kill the whites.” [8] Nothing was mentioned of other ANC slogans such as “kill the Boers” [9] and “one settler, one bullet,” nor of ANC officials’ comments such as “When Mandela goes, we will kill you whites like flies.” [10]And they didn’t dare show any photos of the thousands of white farmers that have been savagely massacred since apartheid ended. [11] And we were not informed that rather than ushering in a post-racial utopia, South Africa’s Black Economic Empowerment program dictates wealth redistribution along racial lines. [12]

The program refers to his second wife, Winnie Mandela, as “fiery and controversial” but neglects to include the fact that she headed a criminal gang that was responsible for the beatings, murder, and torture of adults and children. [13] Nor did it mention his first wife’s divorce filing that included allegations of repeated physical abuse and threatening her with an axe. [14]

We hear glowing reminiscences that Mandela was a voice of “democracy” but not a word about the fact that he was a lifelong committed Marxist. Even though he shrugged off accusations of being a communist, the South African Communist Party claimed on Friday that “At his arrest in August 1962, Nelson Mandela was not only a member of the then underground South African Communist Party, but was also a member of our Party’s Central Committee.” [15] Nothing was mentioned about allegations that he handwrote a tract called “HOW TO BE A GOOD COMMUNIST” that claimed “THE CAUSE OF COMMUNISM IS THE GREATEST AND MOST ARDUOUS CAUSE IN THE HISTORY OF MANKIND.” [16]

The 20/20 special left out many other inconvenient facts. Not a whisper was made about the fact that Israel was a huge supporter of South African apartheid and the last country on Earth to sever ties with the regime. [17]

Also left unmentioned is the fact that since apartheid ended in 1994, South Africa has slipped from #93 on the Human Development Index to #121 in 2013. [18] We are not told that the nation now boasts the world’s highest Gini coefficient [19], highest per-capita rate of rape, [20] highest total number of HIV infections, [21] and a per-capita murder rate seven times that of the USA. [22] We don’t hear about deliberate gang rapes that are jovially referred to as “jack rolling,” nor the impenetrable metal “rape gates” that several Afrikaners have placed on the entrances to their bedrooms like jail doors. We don’t hear about the gated communities [23] and the flame-throwing cars. [24] We don’t hear the merest suggestion that South Africa is likely only a decade or two away from becoming Zimbabwe.

Instead, we get Michelle Obama and Oprah Winfrey creaming their jeans over His Holiness. And at the very end, we see children’s choirs in South Africa and New York City singing a version of John Lennon’s “Imagine.” The final frames show a black boy hitting sour notes as he sings the line “And the world shall live as one.”

Consciously or otherwise, that coda may encapsulate what Mandela truly represents and why he’s being canonized to such an absurd degree—he was a charismatic foot-servant of globalism. In the end, despite his image as the foe of colonialism, he may have been nothing more than a useful tool of global finance. He is a token of white colonialism’s surrender to a specifically anti-white breed of global financial colonialism. If he’d been white and fought bravely in the name of blood and soil, his eulogists would be singing a much different tune.

The financial Powers That Be will continue to rape and exploit South Africa’s bounteous mineral riches, and the great masses of the country’s blacks will continue to wallow in violence, poverty, disease, and hunger. The main difference will be that the pesky and irksome Boers who pulled the region out of the Stone Age will no longer be in the way. Like the pioneers who tamed the American West, they have served their purpose and are now being discarded.