Thanks to an advantageous geographical position set between the world’s two major oceans, Americans have been in large measure immune to the consequences of war, upheaval and terror in the Eurasian Great Game. Since Vietnam the United States military-industrial complex has managed to prosecute expeditionary wars across the span of the globe while maintaining losses at a level acceptable to an American citizenry manipulated through its patriotism and distracted by an entire synthetic universe of amusements. Yet on occasion, even in a disneyfied haze of pornography, sports, and television, moments of clarity on America’s mission in the world do arrive, even from the most unexpected quarters. Director Michael Bay’s 13 Hours: The Secret Soldiers of Benghazi, a film portrayal of the September 11th, 2012 Benghazi disaster, is one such instance.

Bay, known for his love for combining cartoonish explosions, high-tech firepower, and swimsuit models, wouldn’t likely be the first man on anyone’s radar to deliver a hard-hitting indictment of Washington’s foreign policy in the Middle East. His ridiculous Transformers series, after all, has enjoyed enormous popularity with both adults and children, with its content paralleling the fantasies of your average third-grader. But Bay must be commended for his work on 13 Hours, and not only for a skillful reiteration of the jihadist attacks on US facilities in Benghazi and the death of Ambassador Chris Stevens.

Telling the story through the eyes of the CIA security contractors who fought to protect their fellow countrymen that day, Bay convincingly shows the seeming purposelessness of US Middle East policy. The contractors, hard men who have already served in the military as special operators, are thrown into a cauldron of revolutionary tumult, corruption, and double-dealing, all in the midst of a firefight with terrorists who seemingly came from nowhere to unleash hell. In truth, hell had been unleashed by their very employers, the policymakers, strategists, and covert operations planners who set the celebrated Arab Spring, an ostensible chain of “people-power” revolutions, into motion.

Throughout 13 Hours, the maelstrom builds as jihadist gangs, without any real explanation, go about their murderous work and lay siege to the US consulate and a CIA operations base. (It must be noted that no mention is made of CIA arms transfers from Libyan stockpiles to Syrian rebels – jihadists – run with the assistance of Turkish intelligence, a likely factor in the attacks.) Many of these urban guerrillas are cut down with cold precision by the veteran contractors, but Bay isn’t making a case for chest-thumping American “exceptionalism” or further misadventures abroad. Rather, these brave men with families at home are fighting and dying in “a country they know nothing about for reasons they don’t understand.”

As they withstood wave after wave of frontal assaults, it is unlikely the contractors were aware of the whole sordid history of US intelligence’s support of jihadist movements from the 1970’s onward for strategic advantage, beginning with Zbigniew Brzezinski’s carefully-laid Afghan bear trap. They probably didn’t know the full extent of Langley and the Pentagon’s continual use of Al Qaeda in Central Asia, the Caucasus, the Balkans, and the Middle East over decades and right up to today, all in the quest to dominate Eurasia and its resources. With Libya overrun by Islamic extremist militias sponsored by none other than NATO after the unjust overthrow and murder of Muammar Gaddafi, a year later the American operators came face-to-face with the monster their masters had created. So often treated to propaganda for the next war, Americans should see 13 Hours not just as a well-executed action movie, but a sobering, much-needed call for non-interventionism. 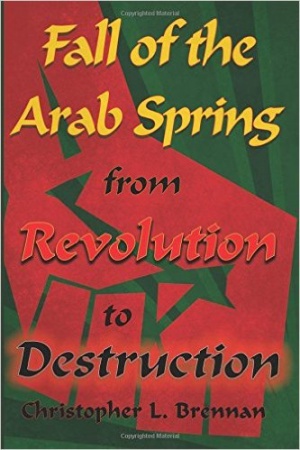 Terror, conflict, and chaos – these are the fruits of the Arab Spring. What Bay depicts so well in 13 Hours needs intellectual grounding, however. The chaos that so characterizes the film was the ultimate result of years of planning and preparation, a design to “manage” the Middle East in accordance with the interests of Western oligarchic elites. No better work can be found on the subject than Christopher L. Brennan’s bookThe Fall of the Arab Spring: From Revolution to Destruction, both a comprehensive geopolitical analysis and cautionary tale to would-be revolutionaries.

In detail Brennan lays out a larger strategic framework for why the Arab Spring was fomented, from the Maghreb to the Levant, and how. Beginning with public-private partnerships between the State Department, multinationals, and a constellation of NGOs and transitioning to support of the Muslim Brotherhood, arming jihadist groups, and direct military intervention, a series of supposedly popular uprisings across the region was choreographed from its very inception with the connivance of regional players such as Turkey, Saudi Arabia and Qatar. Countries like Egypt just barely survived the experience, while Libya did not. Syria is fighting for its life, and the lives of millions have been ruined in the name of democracy. Liberalism is long the international financial priesthood’s favored instrument of subversion across cultures, and whether it’s paired with neo-fascism in Ukraine or jihadism in the Middle East, the final objective of all such veiled coups is a form of control only afforded to the gods: the power to rape and plunder nations at will, to wipe a people from the face of the earth. Brennan rightly denounces the postmodern imperial enterprise and its hipster revolutions as a destructive fraud:

For the Arab world, the romantic illusions of ‘democracy’ and ‘dignity’ – platitudes sold by the West – were shattered, and much of the region degenerated into the breakdown of state and society. This was the chaotic self-fulfilling prophecy of “Lebanonization,” unleashing the forces of sectarianism and balkanization. In the major states where regime change succeeded – Egypt and Libya, for example – the process accelerated. Egypt saw inter-confessional tensions between Copts and Muslims following the seizure of power by the Western-backed Muslim Brotherhood; Libya was most palpably reduced to status of an outright failed state. These are painful, but nonetheless immediately salutary lessons for would-be Arab youth revolutionaries, the primary participants on the ground. Rather than credulously accepting vacuous ideals offered by self-interested Western powers, the outlook of Realpolitik is more instructive and practical. Following a wave of foreign-sponsored “revolutions” that swept Europe, Germany’s Otto Von Bismarck – exemplar of statecraft in the 19th century – remarked that the age of romantic idealism was over; the future would be decided not by romantic notions or assemblies, but through blood and iron. It is incumbent upon the would-be revolutionaries of the Arab world and beyond to come to a similar conclusion. Ultimately, having a repressive, authoritarian, or autocratic state is better than having no state at all. In reality, political reforms cannot exist without a functioning national state. This is the fundamental condition all considerations are subordinated to.

Both Bay’s film and Brennan’s thoroughgoing analysis in Fall of the Arab Spring are especially timely, as the destabilization of the Muslim world is merely the first phase of a more radical transformation underway. Decadent Europe is the following target as population displacement from the Middle East is shifted onto the Continent, itself the central arena for spiritual, psychological, and demographic warfare. The chaos is programmed. Americans or Libyans, Russians or Syrians, Germans or Turks: all are worthy sacrifices on the oligarchy’s altar of Mammon, readied for the ascent of the World State. Injustice lies to itself, the psalmist tells us, and the presumptive world controllers can only continue their drive to annihilation for so long. Faith, sovereignty, and identity are embattled values, yet as all the nations shall stand at the Last Judgment, so too must they – and we – endure. Future deceptions will doubtless be grander in scale and more refined; may the case of the Arab Spring be a harsh lesson for the trials ahead.